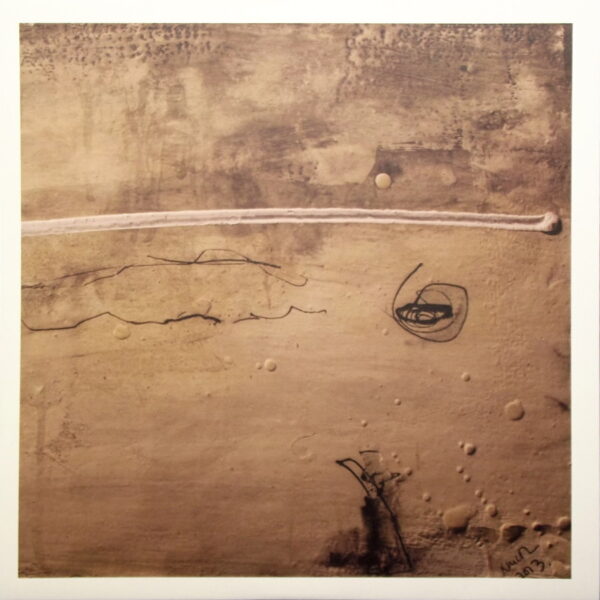 Bewildering item of the day is a split LP which might be called Ruined Again (L’ESPRIT DE L’ESCALIER LELE04R) and which is housed in a perplexing semi-abstract cover painted by Kate McRae. The A-side is occupied by Bruce Russell, a New Zealander underground rock hero held in very high esteem, yet whose work has often failed to engage me for some reason. I must try harder with The Dead C records. I was off to a good start with his ‘No Mean Dub (Chinagraph #2)’ track here, which struck me as a fascinating piece of “occult” noise, by which I mean the sounds somehow keep on concealing themselves, disappearing like the hidden chambers of a magic box. The folds and chasms contained in this short work are fascinating. It seems to have been achieved by an ingenious method of sampling and editing, or tape manipulation, or something.

Russell’s next piece is less engaging. It’s a lengthy spoken-word rant called ‘No Mean City (Escalier mix)’. Reading out texts by Guy Debord (the 20th-century situationist) and Georg Büchner (the 19th-century revolutionary / playwright), Bruce Russell comes across as an unconvincing pseudo-radical, exhibiting some of the self-important demeanour that prevents this listener getting anywhere near his more recent “hermetic” works. Rant may be connected to a printed text inserted in package, where he invokes all manner of references as he outlines his “Formulary for a new Christchurch” with slogans such as “destruction reorders everything” and “nomadism became our condition”. I’m in favour of anyone who takes a stand against the so-called “improvements” of urban development, and Russell does flirt with some interesting ideas about his preferences for a city which “grows from our needs”, but I’d like a better developed argument; he takes three columns to state the same simplistic case several times over.

The flip of this odd record is by Gnarlos, who created ‘The Organ Courier and The Chinese Billionaire’ using overdubs of acoustic instruments and tape manipulation. Long puzzling moments of sheer gibberish pour forth, in a sometimes-engaging lo-fi construction where distortion and layering conceal any deep meaning that may be on offer. There’s an air of silliness created by the speeded-up voices chattering away at the start; one has an impression of the infinite numbers of monkeys with typewriters, but instead of the works of Shakespeare they produce a million and one pages of infantile tripe. Again, a short printed text bolsters the music; it’s a would-be fable with aspirations to profundity, but I suspect at root it’s merely a shaggy-dog story which means little. Gnarlos is one half of Bren’t Lewiis, and a member of the Butte County Free Music Society, an affiliation which trades heavily in this sort of playful, absurdist noise. From 23rd October 2014, very limited vinyl pressing.