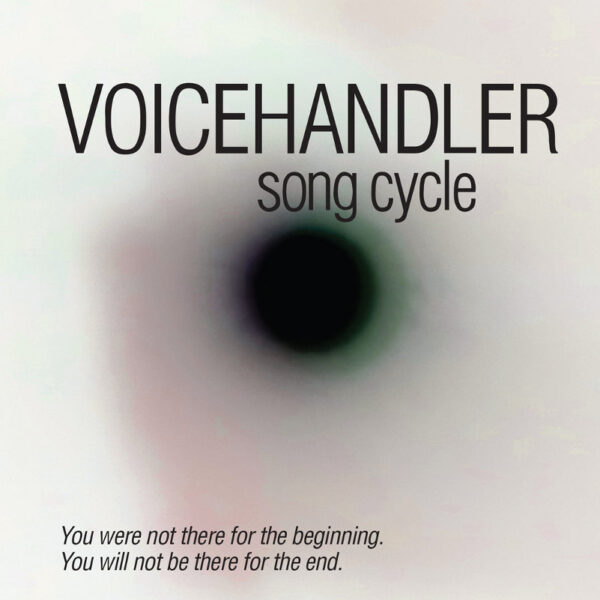 Voicehandler is an intriguing name for a band, isn’t it? It sounds like the sort of job title you might see in the end credits of a film, something along the lines of “snake wrangler” or “lion tamer”. It implies that the “Voice” is a separate entity, something which lives in a box between recording sessions and which they only let out when its specially trained handler is around to look after it. Which sort of sums up the ambience of this album.

What we have here, then, are five tracks distilled from various literary sources and stirred into a deep, dark electro-acoustic broth by Oakland experimentalists Voicehandler. Jacob Felix Heule provides the electronics and percussion, whilst Danishta Rivero brings the voice and hydrophonium. This last is an instrument of her own devising, made up of glass jars filled with water and submerged microphones that can be struck, blown and sung into to produce a range of startling sounds.

Perhaps the most startling sound on the whole album, however, is Danishta’s own voice. On opening track “soñando”, she relates the creation myth of the Yekuana people of the Upper Orinoco River in an eerie croon before doing something quite extraordinary – a sort of choked-off ululation that leaves you in awe of her vocal prowess and fearful for the state of her larynx. It certainly gets your attention.

The album mixes these vocal excursions with percussion freak-outs and clouds of electronic fog, evoking Borges, Hamsun and Burroughs in various ways. Personally, I prefer the vocal tracks to all the bashing and crashing. These things always sound as if they’re more fun to record than they are to listen to, but that’s just me. It’s all of a piece, I suppose, and I can see how the noisy improvisations on “empty and without pain” might represent the disintegrating mind of the protagonist of Knut Hamsun’s “Hunger”.

If you have a place in your heart for Nico or even Björk, then you should find much to enjoy in these spirit-world lullabies and laments.