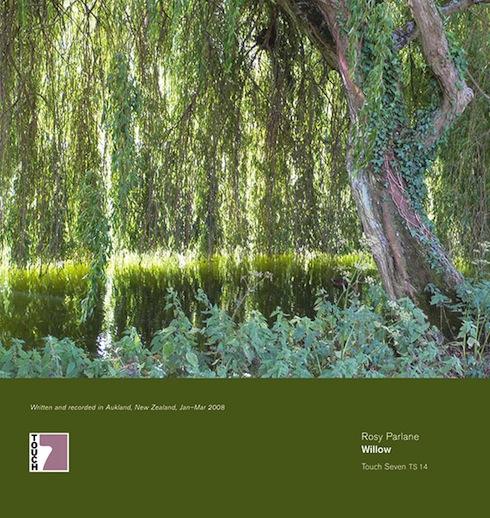 Two more releases from the Touch Sevens series which we somehow overlooked. Rosy Parlane’s Willow (TOUCH SEVEN TS 14) was released in 2012 and contains old recordings from 2008-09; pleasant enough ambient drone music, in two four-minute slices. As New Zealand drones go, Parlane is one of the major players, but I personally find his sound a tad too “clean” compared to the grittier droners like Pumice or Sandoz Lab Technicians, and he doesn’t quite have the depth or substance of Peter Wright.

More intriguing is Repaired / Replaced (TOUCH SEVEN TS 13), a short experiment in field recording by label boss Mike Harding issued in 2013. At least, I assume that’s how he arrived at these two slightly bewildering snapshots; he names the location, and he details his recording equipment, but remains silent as to the subject matter. The first side is a brief glimpse of what might be an interior of a house, where “repair” work is either underway or someone is performing an inspection that determines that such repair is needed. It’s somehow both slightly hilarious and also profoundly sad, a miniature observation on futility; the Eric Sykes 1967 comedy The Plank rewritten by Albert Camus. The B side is even more absurd, a sample of rainfall (perhaps) lasting for less than 30 seconds, yet inducing a heavy heart for the listener. Harding’s Touch compilations used to specialise in these brief yet moving sonic statements, presenting found sounds and incidents which appeared slight or inconsequential, yet could somehow affect your perception of things quite unexpectedly. The back cover contains a quote about a “holy war” which is vaguely provocative; I have no idea what significance it has in this context.