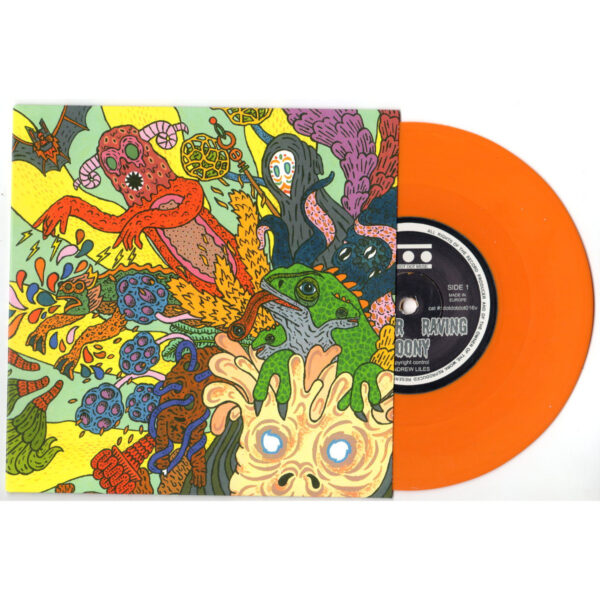 Recently noted Andrew Liles for his contribution to the unusual single The Glottal Allowance. Since I’m not as familiar with the work of this prolific and well-respected soundster as I ought to be, I’m not sure what to make of the A-side to his ultra-wacky single Monster Raving Loony (dotdotdot016v), released on the Irish noise label dotdotdotmusic. It plunges us into the depths of grotesque hilarity and insanity from the off, with a creepified vocal muttering lines from Lewis Carroll in the sputtering wheezy tones of a disturbing, wizened old loon. Musically, there’s a cheesy rhythm and organ melody which you’d expect to hear in some nightmare reimagining of 1970s Saturday TV, along with the carelessly-strewn TV cartoon sound effect samples which punctuate it like playful barbs. But there’s a vague nastiness underpinning Liles’ nonsensical jabbering vocal, even as he blows his raspberries at the grotesque farce that is the UK General Election (they had meant to get it out in time for 7th May this year, or 1st April – whichever comes first. Either way a carnival atmosphere of zaniness was intended.)

The B side, ‘Loony Monster Raving’, is supposed to blacken the air with a more “sinister” take on mental illness and insanity, but it still seems overly wacky to me, with its speeded-up voices a-cackling, its unexpected drum machine silliness, and an out-of-context recit that makes it resemble a bad dream from daytime Radio Four. Nurse With Wound (with whom Liles has worked) has done does similar jokes which I don’t quite get, in the form of easy-listening record cut-ups which are intended to be both mirth-inducing and darkly subversive in some way that eludes me. Jake Blanchard did the cover art of a psychotropic head explosion, and it’s pressed in orange vinyl limited to 300 copies. Arrived 6th July 2015.