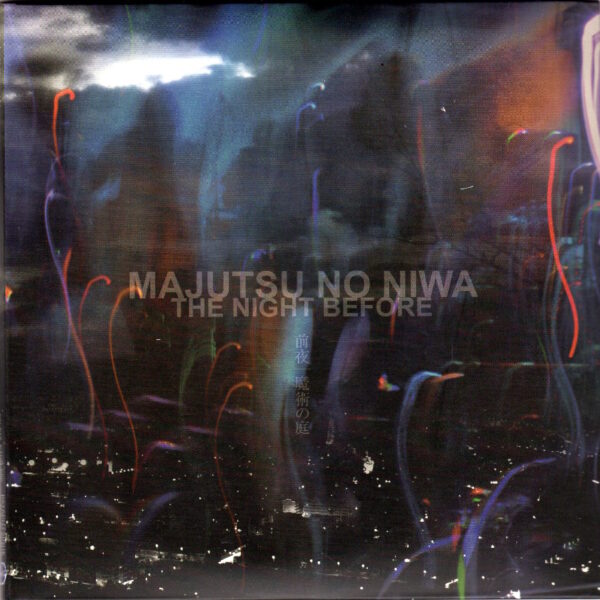 Nice to receive a double-CD album The Night Before (PATAPHYSIQUE RECORDS DD-012 / CAPTAIN TRIP RECORDS CTCD-686) of heavy Japanese psych-rock, a genre I’ve been addicted to ever since the Tokyo Flashback sampler discs started appearing from P.S.F. Records in the early 1990s, and caused maximum distress to thousands with their high-end mastering…Majutsu No Niwa may not be first-division major stars in the league of High-Rise, Mainliner or Musica Transonic when it comes to radical reinventions of heavy Stooges-influenced psychedelic music, but lead guitarist and singer Fukuoka Rinji is not a man to be dismissed lightly. While we’ve recently heard a fair bit from his melancholy introverted side in the form of astringent acoustic duets with Michel Henritzi, he’s out-there and all-rocking on these two sprawlers of 2014 recordings, one studio CD and one live DVD, and the music’s more of apiece with one of his other many projects Overhang Party (who appeared on Tokyo Flashback Vols 2 and 3).

The studio set is packed mostly with straightahead rockers, as if they were extended jams by Mick Ronson and The Spiders from Mars playing a highly melodic hard-edged clutch of old-fashioned ballads and stormers while Bowie wasn’t looking. The wall of guitars (more like a barrier of solid fuzz) just won’t quit, the solos squeal like live eels as they pass unwillingly through the wah-wah pedal, and the vocals are haunted by the triple ghosts of Bowie, Bolan and Ferry (and any other glam star from the 1970s you’d care to name, with the possible exception of Brian Connolly). One track here (‘Tropics, Ionized Jungle, Peeping Auroras’) stands out as being “cosmic and abstract” with its distorted feeding axes brooding in a dark way that Ghost would have liked to glom onto their early albums, but the long title track which closes the album is also more experimental than the rest of the glammy stuff, meandering through a thick swamp under a full moon, wallowing in its own disjointed and forlorn noises. Their version of Iggy’s ‘Search & Destroy’ is also, erm, interesting…the cover art is ambitious, but while its vision of cosmic lights like the Aurora Borealis may work as a wall-size art installation, it loses something being shrunk to CD size and comes over a bit murky. A joint release between Fukuoka’s own Pataphysique Records label and Captain Trip Records, the latter run by Ken Matsutani of Marble Sheep. Arrived 5th May 2015.