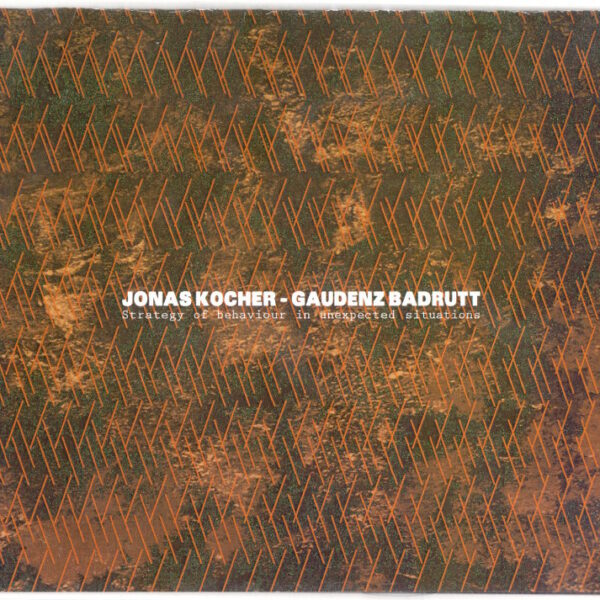 Accordion player Jonas Kocher has shown up on our horizon a few times in the past, most recently as part of the ill-fated and controversial 300 Basses project, where he partnered up with that other notable avantist who has declared war on the accordion, Alfredo Costa Monteiro. Both are determined that the old squeeze-box should be forced to do anything but sound like a musical instrument, and they’ll stop at nothing until total domination has been achieved. On Strategy Of Behaviour In Unexpected Situations (INSUBORDINATIONS insubcd07), Jonas Kocher pursues his absurd nihilist project with the help of Gaudenz Badrutt, who supplies piercingly discomforting electronic tones. On a single track of 33 minutes, the duo sustain a mood of supreme tension, as though their bodies had been cast in stone, neither daring to make a move that might surprise their opponent. If you recall, this sort of thing – by which I mean silence, rigidity, and miserliness – used to be quite prevalent some 15 years ago, particularly in Japan; but Swiss intellectual Kocher seems determined to push the idea of taut, minimal playing into an extreme dimension of his own making. A dimension that involves many doors and barriers made of plywood, such that the listener may feel vaguely at home, but also hemmed in; it’s not clear where the living room leaves off and the wooden coffin begins. Badrutt has come our way before as a one half of Social Insects with Hans Koch, and also plays as strøm with Christian Müller. An extremely trying listen, but the overall sound is brittle, spacious, and oddly fascinating. Released in 2012.