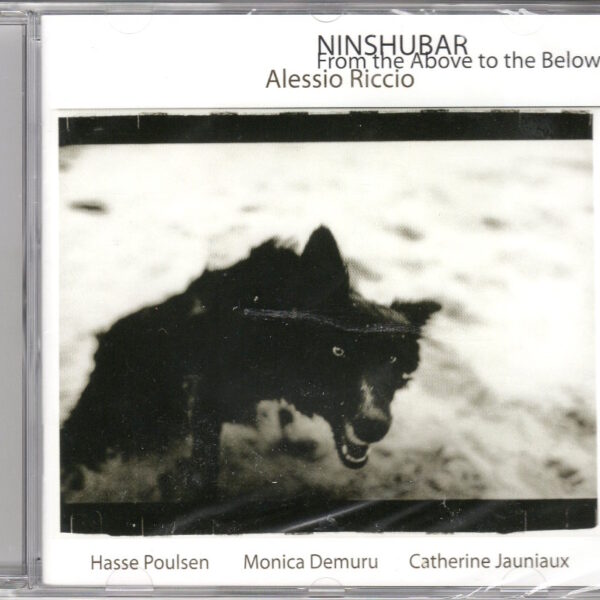 Catherine Jauniaux (see previous post) shows up again on NINSHIBAR: From the Above to the Below (UNORTHODOX RECORDINGS UNHX011CD), an album credited to Alessio Riccio who plays most of the instrumental backdrops with drumming and percussion, and uses his laptop to process the sessions involving the guitars of Hasse Poulsen and a second vocalist, Monica Demuru. Riccio also credits himself with “organic sound mosaics”, which presumably refers to his facility with making hyper-fast and startling edits, which is what the finished product largely consists of. To put it another way, he can’t stop tinkering; not two seconds of a musical performance is allowed to pass before it feels the sting of Riccio’s editing knife. Plus, there’s an enormous catalogue of samples lifted from his favourite records of avant-garde noise, leading him to credit Fred Frith, Lasse Marhaug and many others as “indirect performers” in his grand scheme.

The end result for the listener is an exhausting, restless experience, where the fatigue induced by the hard work our ears must do is barely counterbalanced by any pleasurable exhilaration we may derive from this “impossible” mosaic music. This technique is more or less in the area of Noah Creshevsky, except the latter American composer does it with taste and discrimination, while I can’t help feeling that Alessio Riccio’s primary intention is to numb us into a perpetual state of shock. It’s like hearing the complete catalogue of The Art Bears force-fed through a drum-and-bass blender. I can’t say he does any favours for Jauniaux’s work with his aggressive macho technique, nor that of Demuru, who used to be a member of Italian improvising-jazz combo Timet. The label, Unorthodox Recordings, appears to be nothing more than a vanity press to support this overwrought music of Riccio’s, and the enclosed booklet of photos and texts is conceited and self-serving, presenting an unbalanced view of the aesthetic merits of his work. If you’re in need of more Italian art-bombast, you might want to know Riccio used to be a member of Stefano Battaglia Theatrum, a small army of Italian players who created a form of big-band avant jazz whose proportions can only be guessed at.