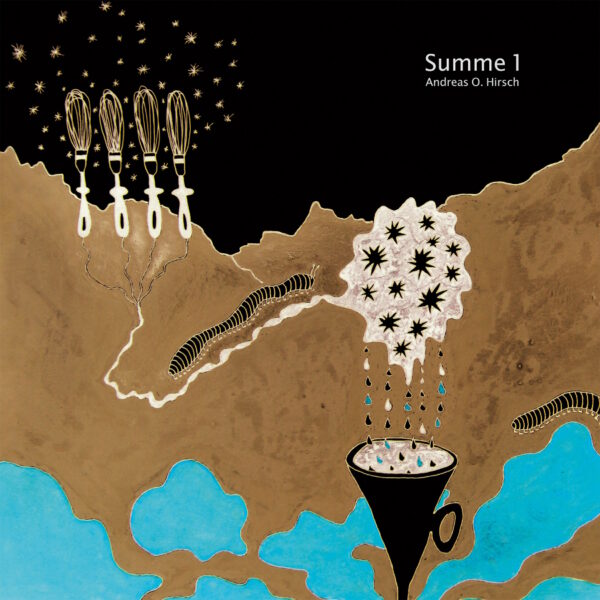 Can’t find much in the way of recorded output by Andreas Oskar Hirsch, but that’s because he’s more of an outdoors man performing at concerts, events, installations and art events than a dedicated studio buff. Seems this Cologne-based artist studied film as his first discipline, and it’s possible a certain cinematic sense has passed into his first solo release Summe 1 (MAKIPHON 002) which has been released as a very nice and not-overlong slice of 12-inch vinyl. On it, he’s shooting for some sense of other-worldly travel, the voyager surveying the more exotic and remote parts of the globe – some tracks do indeed convey “instant jungle danger” or “blistering desert heat” if viewed as a slightly unusual form of library music. You’ve only got to look at the cover art also, with its faux-naif imaginary maps, where important landmarks (or imagined connections between such landmarks) are apparently designated with kitchen implements, such as four egg whisks and a funnel.

This playful and creative reinvention of the natural world, done in a charmingly child-like manner, extends to some of the details included in the sounds, such as the track that features field recordings of crane calls; Hirsch takes an interest in these because he’s engaged on another separate project decoding birdsong using the principles of Morse code. (Quite an advance on Olivier Messiaen there.) While he’s a well-travelled fellow, he’s not presenting long-winded field recordings here, nor boring us rigid with his trite observations on foreign lands, a lapse of which many “phonographers” can be found guilty. Instead, he’s using sounds like a paintbox to express his peculiar take on the world, and keeping his statements tight and concise, even when they describe vast imaginary plains and forests.

He is aided in this by his unusual combinations of instruments, which includes the playing of rubber bands to achieve a home-made thumb piano effect, along with harmonicas, electric guitars, and small fans (perhaps using them to blow on the strings, a popular device ever since Keith Rowe). As part of this rubber-band activity, Hirsch plays something called the electrified palm leaf, a beautiful half-sculpture instrument he invented which involves elastic bands, carbon rods, and wooden beads inserted into a dried palm leaf, and powered with contact microphones. He’s since gone one better with the invention of the Carbophon, which also appears to be built on the rubber-band principle. A very pleasing and innovative record; we look forward to receiving more leaves from his imaginary Atlas. From 15 June 2015.