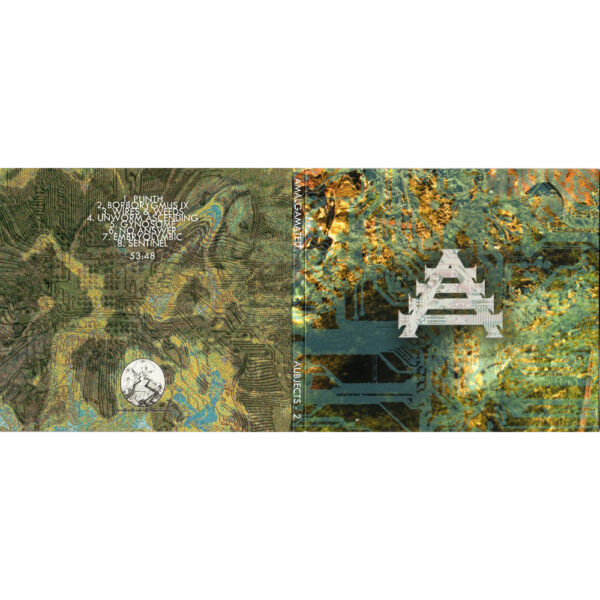 We’ve heard a few items from the Illinois collective Amalgamated in the past, mostly short CDRs on their own Intangible Cat label. In June 2015 we were sent a large package of more recent projects associated with this low-profile combo, three of them cassette and book packages in a series called Aubjects. Number 2 in the series is not a cassette, but a new CD album by Amalgamated, released I believe in November 2014, and their first full-length release. As with the previous CDRs, one of the keywords is reassembly; each track is a construction from studio recordings and improvisations, recast and remoulded into new works, much like Holger Czukay would do with Can recordings on Limited Edition. Phil Klampe, Bob Newell, Cory Bengsten, Mike Richards and D. Petri are all involved, along with occasional bass player Frank Rathbun; the raw material used here was recorded 2004-2007 and was mixed and re-ordered over a period of three years. To put it another way, they have a backlog of home recordings which they can draw on at any time to create these new Frankenstein-monster assemblies; “these tracks have been sculpted from their original improvised form into more delicate and intensely textural states” is how the band themselves refer to this process.

Amalgamated continue to project a slightly mysterious vibe and while they have a heavy debt to Krautrock and some of the further reaches of spaced-out psychedelic rock, they can also produce moments which are strikingly original and fresh. Some of the longer tracks are especially effective, creating enough cosmic layered murk for the listener to get lost inside. Maybe they’re not quite as lo-fi or as brutally avant as they would like to think they are, despite their avowed allegiance with 1970s home-cassette bands and industrial / electronic music. Even the editing / refashioning is not especially radical or daring, and we never sense there’s much boldness behind the mixing desk nor any daring painterly sensibility in applying studio effects or post-processing; most of the coherence is created by a simple looped-beat method. It’s slightly troubling that it’s taken such a long gestation period and considerable remixing effort, just to create these nine tracks, but I’m all for editing and producing a distilled statement, rather than flooding the world with too much product. In all, I’ve got a lot of time for Amalgamated, and as ever they deliver nothing short of enjoyable, off-beat, and accomplished instrumental music here.