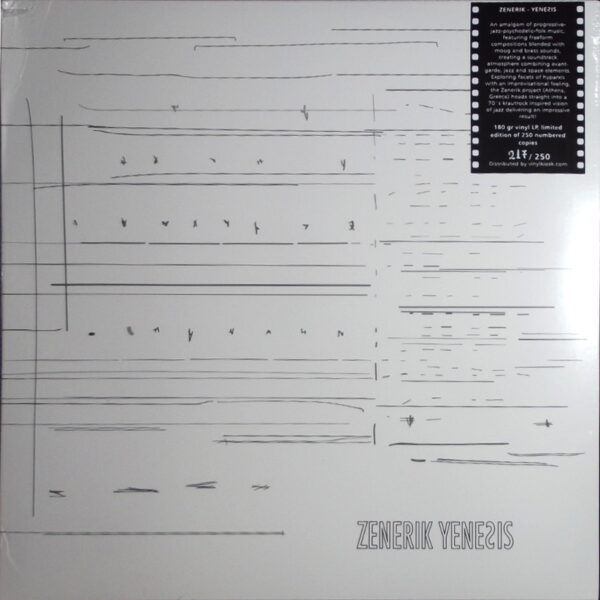 Got a lot of time for this unusual album from Greece – Yenesis (NEGATIVE POSITIVE) by the seven-piece line-up Zenerik, who characterise their work as “progressive-jazz-psychedelic-folk”. We received a CDR version from Dimitris Karytsiotis in Athens who released two vinyl editions – one of them in white vinyl – on his own Positive/Negative label in June 2015. (He also runs an online record store, Vinyl Kiosk.) After I played it on the radio and responded with my usual excess of enthusiasm, those involved kindly sent me a vinyl edition and CD pressing too. The talented seven players here perform using a mix of rock and jazz instrumentation, woodwinds and electric guitars competing fiercely in the performance space alongside a percussion section that’s determined to hammer everything into the ground. Melodic snatches rub up alongside atonal noise; tuneful proggy instrumentals vie with scrabbly, abstract sections. There’s even a Moog synth player, nicknamed “Super Mario” from Ankh Productions, getting in on the act with quite menacing low-level growls and murmurings. If they want some imagery from Greek mythology, I’ve no hesitation in likening this band to the Hydra, that many-headed serpentine monster which featured so heavily in Herakles’ second labour. If Zenerik appear at times to be fighting among themselves, it’s a friendly brawl and always to great musical effect; the listener has several strands of competing information to decode, intertwined like strange strands of seaweed in a salty wine-dark sea.

The seven players don’t have much of a history that I can find, apart from Lina Fontara who has also recorded with Popi’s Orchestra. The assurance with which this record has been made is remarkable, and it carries a freshness and spontaneity that is highly enjoyable, along with its very clean recording sound. For these and many other reasons, it does feel old-fashioned in a good way, the same kind of straight-ahead production that you used to get on early 1970s prog albums, and it feels like Zenerik are productively revisiting the English jazz-rock agenda which enjoyed its brief flurry of success in the UK. For lovers of records which straddled the 1970s prog-jazz divide such as Keith Tippett’s Centipede, Indian Summer, or John Stevens’ Away, or even early versions of Henry Cow, this record will be most welcome, but this isn’t to say that Zenerik are self-consciously attempting to emulate progressive or psychedelic rock in the same “retro” manner that you find on Sulatron Records, for instance. There’s just a lot of musical craft, a love of playing together, and a refusal to attempt to “update” the sound for contemporary audiences.

It remains to mention the track titles, which are quite pointedly called ‘Fear’, ‘Confusion’, ‘Realization’, ‘Acceptance’ and ‘Deliverance’ – which can easily be read as the story of Greek’s unfortunate economic collapse in the so-called Eurozone crisis, although sadly it doesn’t look as if this poor abandoned country has yet reached the ‘Deliverance’ Stage. This political-economical critique is not explicitly embedded in the music, although ‘Confusion’ contains a lot of anger and dissonant wails, and the album opens with a 30-second babel of voices speaking international languages, possibly sampled from newscasts. A fine distinctive release; there are variant editions, including the CD which has a black cover. Arrived 24 June 2015.