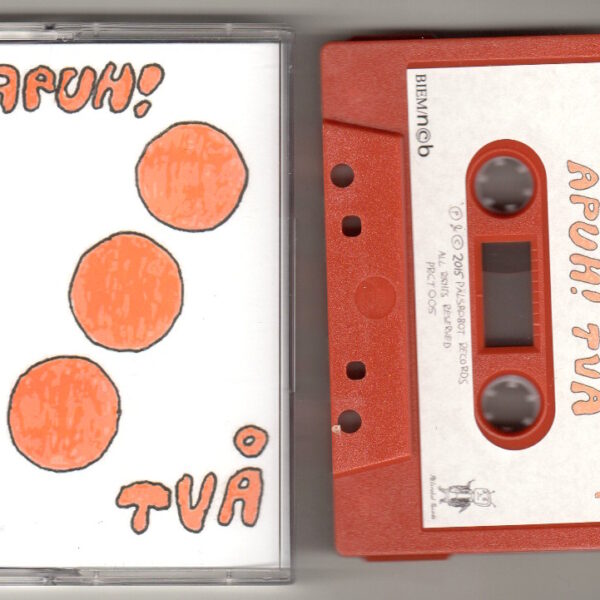 Mediocre acoustic jazzy improv music from APUH!, a Swedish trio who play woodwinds, drums, and bass. I like the dry sound and sparse instrumentation for sure, but the cassette tape Två (PÄLSROBOT RECORDS PRCT0056) contains but a few intriguing moments which sparkle only briefly before the players meander in a circle and run out of steam, revealing that there wasn’t much substance to prop up the tune in the first place. Too often the players rely on personal tics and mannerisms to keep going, rather than structure or interplay. They have respective backgrounds in all sorts of music genres, which is a badge of honour worn quite frequently these days, but they also claim the trio’s genesis sprang from a desire to free themselves from the restrictions of “carefully composed and thought-out music”. If that’s true, then I think we could reasonably expect a bit more fire and spontaneity on the grooves than this rather lukewarm and stilted outing. However, it’s fair to say they’re not lacking for a sense of fun if their slightly zany press photos and general press reception is anything to go by; critics warm to their lack of respect for traditions, and the playful approach to their music, a welcome antidote to a local jazz scene perceived by some as getting a bit staid. They made their debut album Ett for this same label in 2014. This cassette arrived sent by the sax player from Gothenburg 27 July 2015.