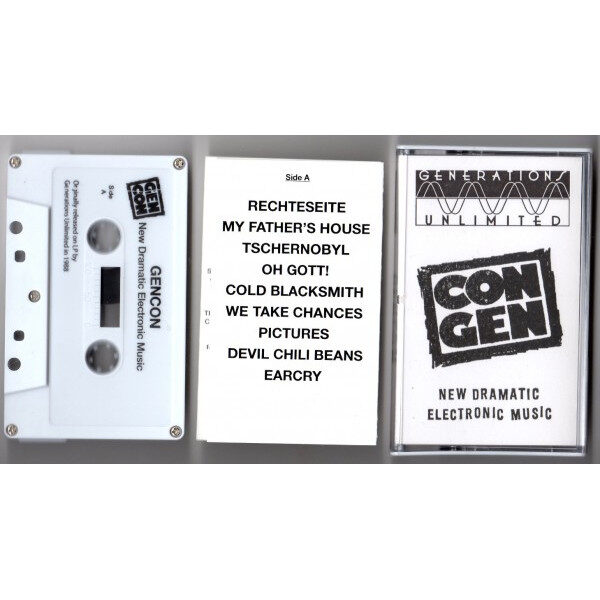 Happy to receive any and all content from Gen Ken…here is a well-presented C60 cassette which reissues a project he did with his old sparring partner and friend Conrad Schnitzler in Berlin in 1988. New Dramatic Electronic Music (GENERATIONS UNLIMITED) is a reissue of a 1988 LP, pretty much split into two halves. Side one emerges as a sort of fractured radio play with music, with a strange mix of found voices, spoken word, overlapping babble and field recordings interspersing the music and songs, which are spread out in episodic fashion. Even the titles read like chapter headings in this half-imagined story. I like the way each episode tends to fade out or wind down just at the point where we want to hear more. It’s an uneasy mix of hard-core experimental electronic music with lighter pieces which are like the duo’s take on 1980s electropop music, all mannered stern voices, simplistic chants, and stripped-down melodies. A very enjoyable and exciting listen.

Side two contains ‘The Story in 8 Parts’, and is a much more elaborate thought-through piece. Presented in six movements and a continuation, it’s one of Conrad’s CONcerts composed for 8-channels of cassette tape playback. As such it’s more formal and coherent than the A-side, and is a unique piece of modernism stamped with the composer’s fingerprints. Both melodic and atonal passages can be found within its labyrinthine structure, and the sounds realised are the best that 1980s technology could do when it came to emulating the sound of brass, piano, strings and percussion on synthesized equipment. (Listeners may well be reminded of The Residents from this time, especially their unsatisfying American Composers series with the weedy keyboards pretending to be trumpets.) A virtual orchestra goes nuts playing this bizarre music. One of Schnitzler’s keynotes is a persistent rhythm – some of his earlier 1970s experiments in electronic music exhibit similar tendencies with their obsessive pulsations, and with their endless supply of ideas these works wipe the floor with 90% of dance and techno music.

David Myers (Arcane Device) did the cover art for this release; originally the mischievous Ken wanted to print different titles on either side of the LP cover, in order to confuse retailers, but this didn’t pan out. The conceptual interchangeability of GENCON and CONGEN is now partially restored on the artworks for this cassette reissue, as is the entirety of the B side’s music which originally had to be trimmed to fit on one side of vinyl. This is part of a relaunch programme for Generations Unlimited, Gen Ken’s curremt enterprise which by June 2015 had produced eight cassette tapes in editions of 100 copies, all of them remastered from original recordings in his catalogue. The list includes gems by If, Bwana, Arcane Device, Thomas Dimuzio, and other notable noise electronic types from the 1980s.