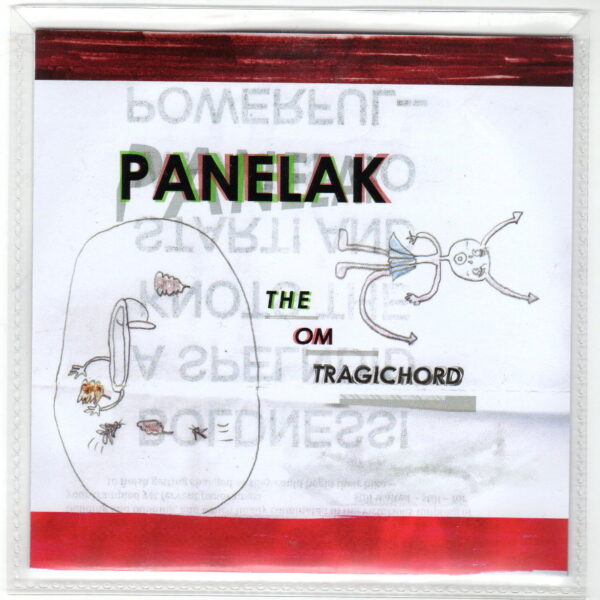 No-nonsense noise malarkey from Panelak, a Leeds-based solo turn whose real name is Pascal Ansell, on The Om Tragichord (LF RECORDS LF046), which features a brief sampling of our favourite Yorkshire absurdists The Bongoleeros at the end of one track and arrives decorated with Boredoms-like scrawls and collages by Emi Ueno Neilson and Pascal. If we wanted to break down the constituent parts, there’s about 35% Merzbow-type pumping action noise, 25% bedroom cassette lo-fi growling, 15% “shocking” voice samples violating as many sex taboos as possible in five mins., and a certain amount of unknown ingredients, including some very bad guitar playing. I was hoping to enjoy this a lot more, but the Panelak approach seems a bit disorganised and Pascal Ansell is unable or unwilling to martial his forces in ways that might strengthen his attack. Too many half-baked ideas slip through the net as a result of his balmy “anything-goes” process, but on the other hand when things do succeed, he’s capable of creating an enjoyable racket that seems perched between menace and comedy, that’s somehow both repellent and entertaining. He’s collaborated with noted improv drummer Paul Hession, and also with the Gypsy Dogs drummer Adam Hansraj. Pascall has also surfaced as one half of No Thumbs with Jon Marshall. From 1st July 2015.