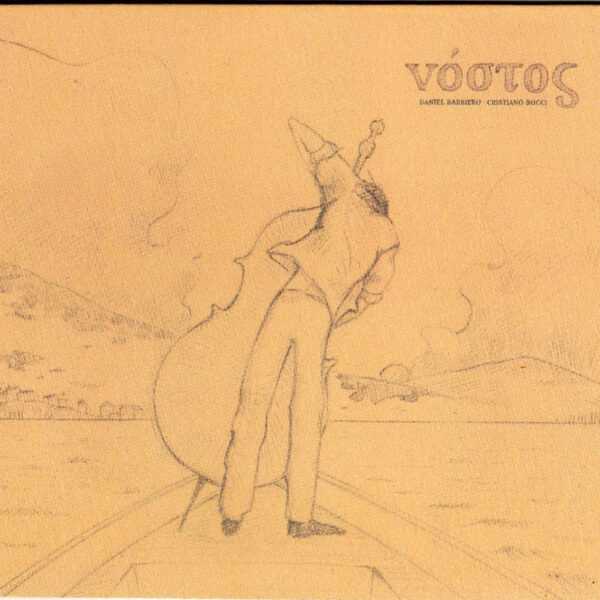 Excellent record of moving music is Nostos (ACUSTRONICA AT051), which has its origins in double-bass playing and from the cover I even half-expected it to be a record of improvised music in a somewhat jazzy vein. It might be more accurate to think of it as a modernist electro-acoustic composition…most of the bass playing is by Daniel Barbiero, an American composer and musician from Maryland, who subjected his work to a process of modification, cutting-up in the studio, and reassembly as a new piece, with the addition of subtle electronic effects and (in one case at least) sound effects of rushing water added on; said manipulation courtesy of the other half of the act, Italian musician Cristiano Bocci. The results are compelling, fascinating, and genuinely affecting; the mournful music more than lives up to the promise of “nostalgia” implied in the title, and it shows this was not an empty exercise done for the sake of computer-processing or showing one’s prowess in working with audio files. Even more impressively, the work was done in a “virtual” space, by sending content over the internet, which implies the two never met in person to make the record. Daniel Barbiero is a new name to me, but I’ll be looking out for more instances of his activity; he’s worked with important players in the genres of jazz, improv, and electro-acoustic composition, such as Gino Robair, Andrew Centazzo, and Al Margolis. He also plays in the groups Subtle Body Transmission Orchestra and Colla Parte. Cristiano Bocci has studied classical avant-garde music, and is founder of a musicians’ collective; he’s also a bass player, and can be heard on track 8 here, but more recently has turned his attention to studies of computer music and learning to play the theremin. Very fine indeed. The music is licensed under a Creative Commons License and apparently free to download from the label website in both FLAC and MP3. Arrived 17 August 2015.