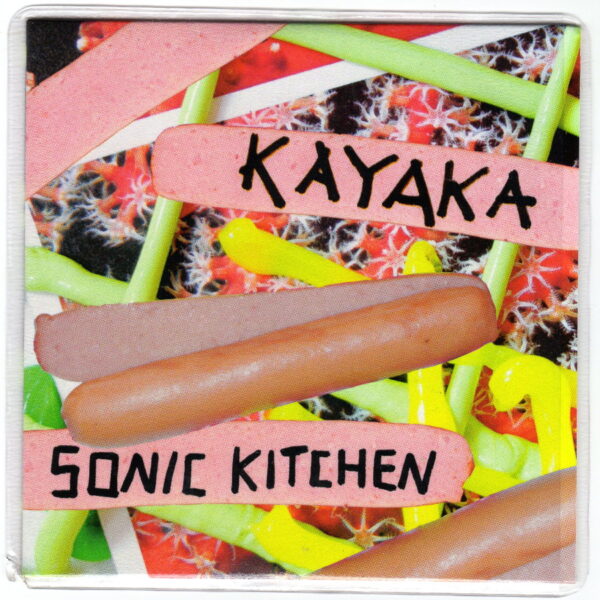 Another fine package from Kayaka, the Japanese creator whose delightful, distinctive and good-humoured work has endeared itself to use since 2011 and a run of obscure CDRs, some of them featuring her bass clarinet playing but most of them exhibiting her cut-and-paste skills in constructing new music out of old records, samples, and effects. Her new release has found a home on the London-based Adaadat label, one of the primary sources for imaginative weirdness and quirked-out genius in the UK just now. The nine tracks on Sonic Kitchen (ADAADAT ADA0040) were created in Berlin in 2013, and once again Kaya Kamijo produces a dense, foggy quagmire of overlaid sounds, adding as many layers and rhythms as she thinks she can get away with, before the production collapses under the weight of its own varnish. If indeed she was a cook in a “Sonic Kitchen”, she’d be the kind of baker who can produce an iced cake 30 feet high and covered with filigree icing, producing an impossibly tall and spindly balletic sculpture that apparently defies gravity. Or she’d build a replica of the Brooklyn bridge out of Porterhouse steaks, that you can only eat using a lawnmower. Either way I’d like to think she would serve something more imaginative and appetising than the split hot-dog sausage that appears on the cover.

All of these tunes proceed with the easy-going, walking-pace rhythm that I describe as a “clonking” beat – the opposite of high-speed Techno music or the like, and certainly Kayaka exhibits zero interest in a slick dancefloor production when she prefers calling attention to the mechanics of how each song is assembled. This strategy allows the listener a degree of instant familiarity and comfort, before we’re led gently into the realms of the surreal and the bizarre, as each new unlikely musical element is ushered in, doing battle with spoken-word samples or excerpts from movies. We’re required to follow at least three or more lines of continuous information – a good exercise for the noggin. This time around, one key note or recurring theme appears to be a nostalgia for the past, expressed as old 78 RPM records, including cabaret songs, classical music, and dance music, all cleverly repurposed so as to instantly transcend cliché.

Lesser talents attempting to do similar things with transmuting the history of music into new forms often come a cropper; for one, they use too many samples, perhaps in an effort to convince us of their encyclopedic knowledge, or simply because they have no idea when to stop. For another, they fall prey to the crime of irony, and can’t help sneering ever so slightly at the corny old music our forebears used to enjoy. Kayaka stands innocent of both charges; her sparing use of source material is guided by good taste and an unfailing instinct that tells her precisely when “enough is enough”; and there is genuine affection for the old music she dusts down from the shelves, and she gives it new life in the context of her wonderful concoctions. Enjoy these ‘Pickled Tangos’ and ‘Hungarian Rhapsodists’ today! From 27th August 2015.