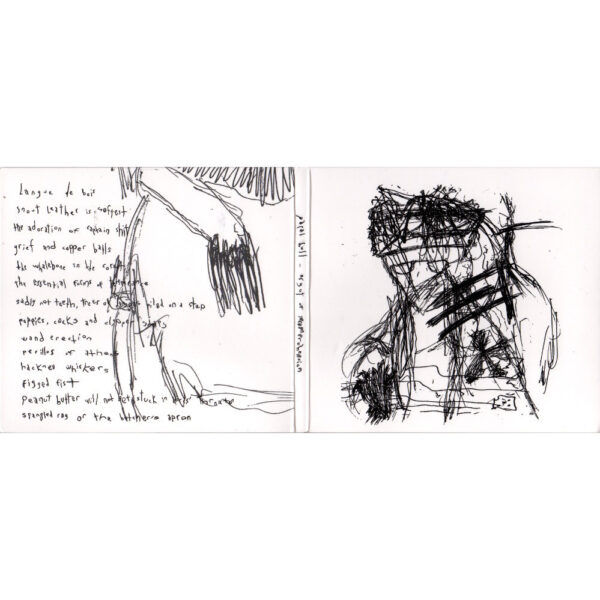 From 13th August 2015, another release by Papal Bull who we first heard on their Chocolate Monk monstrosity, In Ceres A Pig With Human Hands And Feet Was Born. That was part of a package from Singing Knives Records, the Sheffield label that is doing its part to preserve and memorialise a peculiarly English strain of nasty, unpleasant noise – which some critics have discerned as a form of Folk Music, likening the label to a revivalist folk club in some way. If any of this is true, they perhaps ought to offer at least some recognition to those proud Yorkshiremen who have been making repellent absurd noise for a long time already, including Filthy Turd, The Bongoleeros, and George Proctor – whose White Medal project has a long line of downloads of incredibly scuzzy Black Metal music and noise available on YouTube going back to 2008.

The new item Argot Of Incomprehension (SINGING KNIVES RECORDS SK023 / DISCOMBOBULATE BOB007) was performed by the duo of Jon Marshall and Joe Murray, using a combination of electronic and acoustic instruments and devices, but mostly their voices; and a hamfisted, inept, beyond lo-fi approach to home recording that hasn’t been heard since the spread of bedroom cassettes in the early 1980s. 14 short “songs” emerge, each one in fact a grotesque parody of the song form, where lyrics are incomprehensible and the “tunes” and “rhythms” have been mangled out of all recognition by a 2 year-old baby operating a car-crushing compactor. If you can get past the initial shock of the early tracks – the album is front-loaded with its most obnoxious materials near the start – then you’ll find some genuinely radical stabs at experimentation which, though deliberately crude and ugly, are quite innovative and produce some genuinely original results.

I might want to mention Papal Bull don’t really do “power noise”, rather a sort of broken, formless spew which resembles infants playing with their own faecal material, where their idea of “electronics” is a cracked transistor radio powered by leaking batteries and their idea of microphone placement results in numerous moments of mic-bumping percussion accidents, a practice which would make professional engineers wither into the size of a raisin from shame and dismay. Most of the power of their “work” on this release resides in the voices, which have already been noted as sounding like demonically-possessed, but they also resemble an evil Donald Duck mutating through Hellish cartoon tortures in a vile movie directed by Alex Chandon. There’s also a healthy Anglo-Saxon interest in four-letter words and general muckiness, which is often in the titles and implied, if not directly spelt out, in the foul vocal outpourings from these degraded sewer-mouths.

Add to the above the ugly biro-scrawled cover, and you’ve got an irresistible package of incoherent, noisy gibberish that totally fails to communicate on the rational level, yet still demands that you deal with it in some way. One listen will drive you near to the point of madness, questioning whether you have any right to exist as a human being.