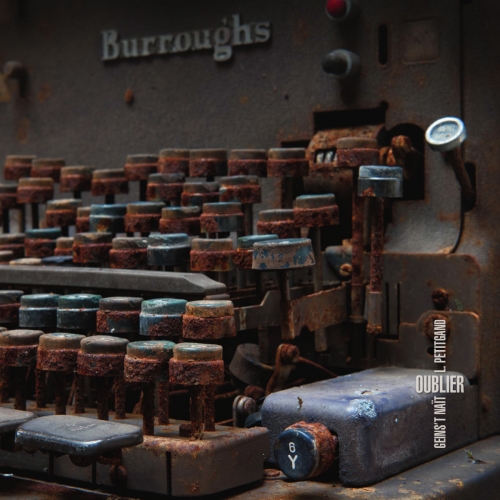 Last heard from Geins’t Naït + L. Petitgand with their 2014 release Je Vous Dis, which Ian Sherred quite accurately identified as a what-if scenario where “a time-travelling Erik Satie had joined Einstürzende Neubauten”. They’re back now with 13 more dense song-constructions in the area of melodic, gritty, meta-heavy industrial grind cut with ambient blur and classical piano fugues on Oublier (ICI D’AILLEURS MT05), another release in this label’s “Mind Travels” series that promises to lead the listener on near-psychedelic or transcendent experiences. Hard to believe the perpetrators have been producing their music since 1986, starting with various releases on the obscure French label Permis De Construire; Naït is pretty much a self-confessed copycat in pursuit of the template set by Throbbing Gristle and Neubauten, while Laurent Petitgand is in the business to indulge his movie-goer fantasies…he’s contributed to Wim Wenders films in some capacity, and it’s likely he’s supplying the more overt “narrative” aspects to this record, including the fragmented and distorted voice elements, and the tastefully suggestive piano moments. Every song is a sluggish journey through a puzzling, obscure road-movie laden with symbolic elements, darkened skies, and bad weather, with only occasional relief at a friendly bar or hotel room. The album is moody, more suggestive of meaning than attempting to transmit any overt content. While the solemn tone and general air of grimness wears thin quite soon, I do enjoy the rich sonic textures and depths on offer here, indicating considerable studio craft in the assembly of each track. From 23rd October 2015.