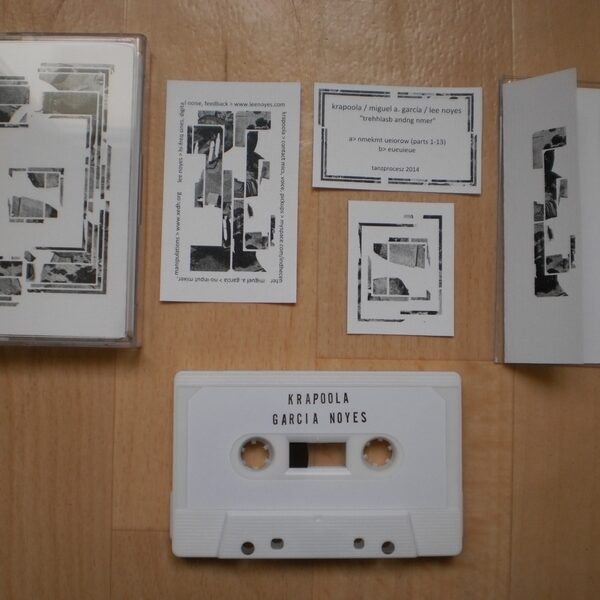 Another great Miguel A. García item from his 2nd October 2015 package, this one a cassette release called Threhhlasb Andng Nmer (TANZPROCESS tzpCS39), a collaboration with Canadian-born Lee Noyes and Krapoola, who might be an experimental DJ from Madrid. As you recall we heard García and Noyes working together on Asto Ilunno in 2014 where they were joined by Tomas Gris. On that, Noyes played piano, feedback and percussion, and parts of their enterprise shaded into some sort of alien free improv jousting affair, but this cassette is all pure electronic noise.

García uses his no-input mixing desk to create 100% abstract tones, and manipulates them using his three-foot bakery tongs made of copper. Lee Noyes credits himself with the production of very specific types of sound: hi-frequency sine waves, digital noise, and feedback; the nuanced differences between these three are probably only clear to an expert. The A side contains 13 parts of a suite called ‘nmekmt ueiorow’, while the B side is titled ‘eueuieue’, and presumably this letter-scrambling method is intended to further disorient the listener and remind us that what we are hearing is the digital equivalent of alphabet soup, a jumble of sonic information strained through devices that filter and control, but also introduce yet more elements of randomness in the process.

You can expect a rewarding and entertaining non-stop bus-ride over strange, bumpy terrain, with no carpet left unfurled and plenty of glitchy broth doled out from the ever-ready cauldrons of this pair. “Some kind of rollercoaster within integrated circuits…” is how they describe it, “an electronic promenade full of pitchfalls.”