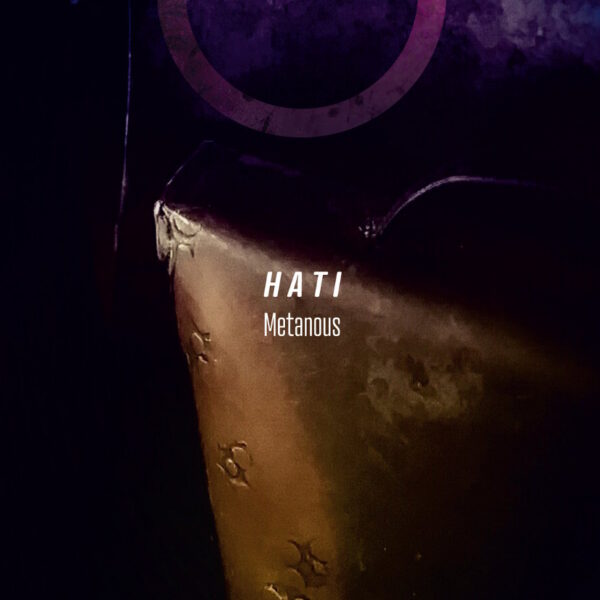 We’ve heard the Polish percussion group HATI a few times now, and their core personnel seems a little hard to pin down…I’ve usually assumed the core duo is Rafal Iwanski and Rafal Kolacki, but they were joined by Slawek Ciesielski for 2013’s Wild Temple, and on Zero Coma Zero it was Darek Wojtas who played with Iwanski. On Metanous (ZOHARUM ZOHAR 105-2), be prepared for yet more confusion as both the Rafals are joined by another player, the droning man Robert Darowski. For clarity’s sake, the label does make it clear this is a “snapshot” of a certain period, 2011-2012, when HATI played as a trio, and we are warned they will never “return in such a configuration again”.

Which might be something of a loss, because it’s clear Darowski added a lot to the bare bones proposal of HATI’s slow drumming and percussion music with his didgeridoos, rain sticks, clap sticks, windwands and PVC pipes. His acoustic dronings add a much-needed humanistic element to this otherwise rather cold music; you can hear Robert’s breath, lips, and breathing patterns embedded in the fabric of the music, which is about as close as the trio will get to have a vocalist or human voice in the equation (which isn’t to say I hope they will consider using chants or choirs or humming – Heaven forbid). Robert Darowski’s efforts also seem to spur the drumming half of the act towards greater accomplishments, and on occasion the music picks up a certain momentum and has more fire in its bones.

To be totally accurate, the drummers also play droning devices – e.g. conch shell, wooden horn, flutes, pipes, etc. – but I will still claim Darowski’s additions are valuable to this specific release. The music remains solemn and dark, though, as most of HATI’s music tends to be for this listener; it leans towards the pseudo-ethnic on its surface, and though one always reaches for words like “ritualistic” and “ceremonial” to describe their earnest tones, the music itself remains non-specific as to what moods, rites, or meanings are invoked. The photographs adorning this six-panel digipak are close-up shots of instruments (cymbals, horns, percussion instruments) that shade into abstract art, further reinforcing this notion of non-specificity. From 15th October 2015.