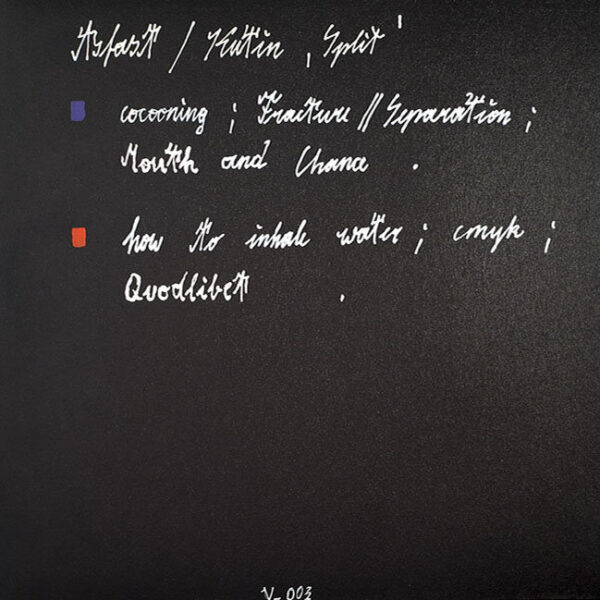 Here’s a split release (V003) on Ventil Records showcasing a couple of young Viennese avant-techno artistes, Asfast and Kutin…there’s a limited run (200 copies) on vinyl and a limited edition artwork package designed by Eiko Groschl, emphasising the blackness of it all…despite their young years, both these guys take a fairly bleak outlook on life, if these minimal emptied-out statements are indicators of anything.

Asfast is Leon Leder…after a couple of file-only web releases in 2010 and 2013, this is his third known appearance. What he’s doing bears little resemblance to dancefloor music (not that I would really know), though you can just about trace his evolution up from the minimal glitch-antics of the Mego label of 15 years ago. Actually what ends up on the grooves is like a negative image of Tangerine Dream, a slightly threatening Kosmische drone in layers packed with unexpected shifts, and pushed along by a weedy, pulsating beat that barely registers on the hospital monitor. Occasionally these layers coalesce into a chaotic noise-affair, but the beginning and end of this journey is far from clear. I feel like I’ve been kidnapped, blindfolded, and pushed into the boot of a car. “High precision and prominence” are the buzzwords from the press release, along with “maximum efficiency and power”. Is this a press note, or a job application for a chief engineer with an industrial plant?

Kutin is Peter Kutin, whose discography is somewhat more substantial, including releases on Valeot and Karate Joe…he even did a field recording job for the “Soundscape” series in Gruenrekorder’s catalogue, plus he appeared on the second release from Ventil, a double LP showcase called Decomposition I-III. Not much respite from the general “grimness” in his claustrophobic tracks of minimal electronic grind…his opener ‘How To Inhale Water’ is every bit as threatening as it might appear from that title. I’ve now been released from the trunk of the car, but I’ve been thrown into the Wien. The slow rise-and-fall structure of Kutin’s sounds here are a cruel mockery of my attempts to stay alive as I gasp for breath. ‘CMYK’ is another instance of inverted kosmische music, like Cluster replayed in slow motion and printed on reverse negative stock. There’s a dance beat buried in here somewhere, but it’s more like the hung-over memory of a night out on the tiles (not that I would really know). ‘Quodlibet’ is a tad more upbeat and feels out of place in this stern company, and indeed seems like an odd way to end the album…rhythms and beats of a sort are fed through umpteen filters and rendered into a queasy mess, with random voices and noise thrown on top. It’s like struggling out into cold daylight after the general nocturnal, enclosed feel of this album. Perhaps I escaped my kidnapping ordeal alive. (From 23 October 2015).