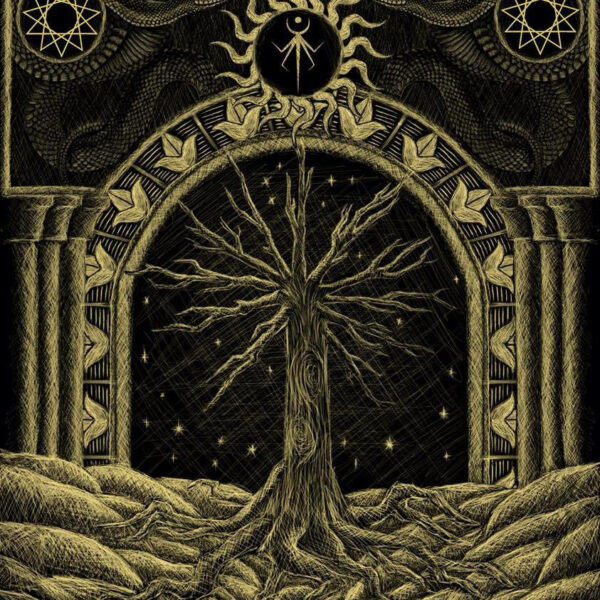 When your first proper release is a short EP at just over 22 minutes, you just need to make a hard-hitting, solid first impression on your audience that carries through to the first and second albums, and Mortuus Umbra (hailing from the eternally Arctic freezing zones of … Tel Aviv in Israel) do a great job here with deep darkling-depths Satanic black metal that possibly owes a huge debt to Deathspell Omega. The music is very dense with a mix of rhythms and beats, switching from blast-beat aggression to mid-speed swagger, and serving up riffs alternating from choppy and jagged to swanky chunk. Guitar chords have a dark sinister tone and can be hypnotic and beguiling in their own demonic way.

“Holy Procreation” (eh?) is a robust introduction to the band’s style and theme in which the protagonist vocalist summons dark forces to embrace him and transform him through ritual into partnership with Lilith in a bastard kabbalah structure. Or something along those lines. I’d love to take the time to explain how the singer might go through his mirror-image kabbalah initiation from the anti-Atzilut to Malkuth but the incoherent ramble would take up twice as much space as this review, at the end of which I’d be just as confused as the one or two unfortunate souls still reading, everyone else having the good sense to abandon this ship. This is a whirlwind track that sweeps you along in a cold atmosphere of jewel-tone guitars and slavering voices. Too few bands have the voice to match their music and Mortuus Umbra is one of these privileged acts in boasting a vocalist whose rasping tones and range (which sometimes comes close to throat singing) can do justice to its style of blackened death. The fury and darkness follow through to the next track to the extent that it’s not much more than an extension of the previous track.

“Omen to the Ancient One” initially promises more intensity and maybe a more varied approach that includes soaring (and searing) lead guitar and perhaps influences from outside black / death metal but the track ends up being Business As Usual. A bit disappointing perhaps but at least we now know the band has potential to expand its range further. There’s a fluttery metal quality in the song’s background that is ominous and inhuman.

This is a very well-made and produced recording with an excellent sound and good music that has dramatic potential. If Mortuus Umbra were so minded, they could have produced something really epic and bombastic but on a recording as short as this, they have wisely gone for a restrained approach that suggests they have much, much more in store for listeners.