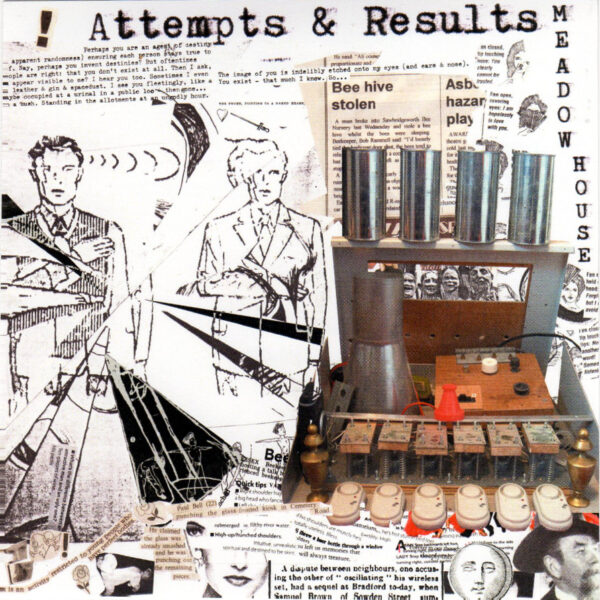 Attempts And Results (BEAUTIFUL MUSIC CDS BMCD 004) is a recent release from Meadow House, the one-man show of benign lunacy that is Dan Wilson and whom we last noted as long ago as 2005 with his album Tongue Under a Ton of Nine Volters. That was released by Ed Baxter’s Alcohol records label, home to similar loopsters and primo dementia-merchants such as Revd Fred Lane, L. Voag, and the Murphy Orchestra; Wilson has also appeared on Resonance FM, with his own Hellebore Shew, and is a member of the combo Oscillatorial Binnage with Chris Weaver, Fari Bradley and Toby Clarkson.

13 self-penned (with one exception) and self-produced songs on this album, where Wilson continues his plan to come across as a friendly loon, creating ramshackle and beyond-eccentric musical productions, and singing in a completely unaffected manner with his rather weak and fey voice. While it’s tempting to liken him to Syd Barrett or Daniel Johnston, Meadow House has none of Daniel’s inner darkness and torment, and despite all of his loopy far-out lyrics, can’t seem to achieve the sublime transcendence of a line such as Syd’s “I tattooed my brain all the way”. There’s no doubt that, through his written lyrics, he achieves a fully-realised world of his own – some of whose trivial domestic details are both amusing and uncanny in their sub-Vic Reeves kind of way – but somehow there’s not enough conviction in the delivery for me. It might just be the singing voice, which comes over as slightly apologetic, like a hoarder inviting us into his home with a sickly grin and telling us to mind out for the piles of 20 year-old newspapers everywhere.

However, I’ll award more points to his unusual musical concoctions. He plays and overdubs everything (presumably), uses lo-fi recording, bric-a-brac and toy instruments in ways that we might expect, and the economy of method repays large dividends. He also has a flair for tape collaging that delivers simultaneously funny and chilling results. When this method succeeds, Meadow House comes close to producing the sort of crackpot home-brewed genius that might have felt at home on the It’s War Boys label. By which I mean there’s innovation, happy accidents, and startling aural moments that genuinely surprise and amaze the listener. A flawed statement perhaps, and somewhat lacking in ambition, but gems are hidden among the bran. From May 2015.