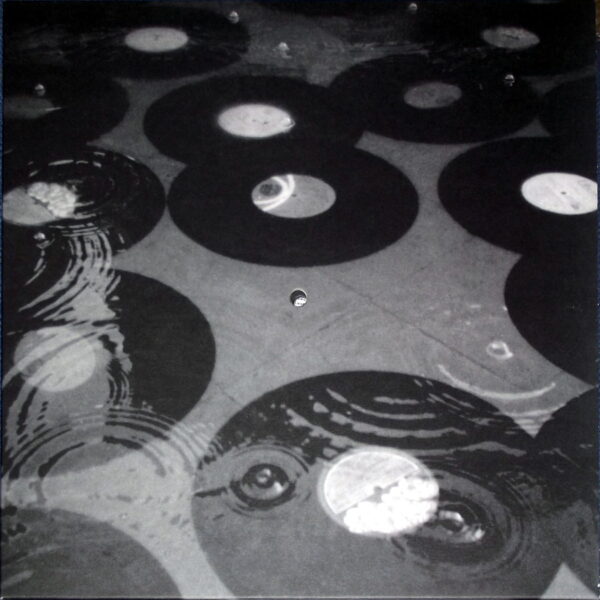 French art-turntabler eRikm is usually sure of a warm welcome here, even if we were a little nonplussed by his forays into modernist composition in recent years, such as Transfall. However, this vinyl LP L’Art de La Fuite (SONORIS LP01) is a winner. It’s a compilation of earlier works from 1994-1995, which also appeared on a self-released cassette. It’s pretty much a showcase for some of the wild and crazy things he has done to vinyl LPs in the pursuit of his musical statements, about which more shortly; it might be more convenient to begin by explaining the cover. It seems he was listening to the weather forecast in Marseilles in summer of 1995, when a major rainstorm was announced. Instead of hiding in his cellar and curling up with two bottles of Burgundy like any sane Frenchman would, he deliberately blocked up the storm drain outside his house, and waited for nature to take its course. Into the ensuing flood, he tossed several vinyl records. This action may help decode the cover photo for you. It may also help to learn that what you see is pretty much the catalogue of the vinyls used in production of the sounds on this LP. 1

eRikm points out with some pride that these records are “virtually devoid of their original sound source” – which presumably is a euphemism for how distressed and damaged they have become after they’ve passed through his radically-experimenting hands. He states with some precision that 80% of the records he uses for concerts end up this way. Which is no wonder, considering the violence he inflicts on their innocent surfaces. Describing his actions with the clinical glare of a surgeon, he lists such techniques as carving extra grooves into the vinyl; scorching, burning, and melting the grooves; and, that old favourite, breaking LPs into bits and reassembling the pieces into mis-matched Frankenstein monsters. 2 And then he plays the damaged records, of course. The resulting disrupted playbacks from such experiments are displayed on this release.

Further interventions follow. Feedback from the record players; spinning discs at wrong speeds; random stylus pressings on vinyl spinning at high speed, and manual repeats (scratching, in other words); loops produced from records, and further loops added with an effects pedal; and prepared guitars, strings, pieces of metal, bowed objects, and what have you. The process of interference has been near-total, eRikm finding a way to colonise the entire set-up of machinery and objects with his restless body and spirit. Glorious noises result, often highly reminiscent of the howls of pain which the records and the players must be undergoing. While almost completely abstract – eRikm is not a semi-narrative turntabler, like Philip Jeck – this raw sound art never fails to transcend its process origins, and produces genuine aural surprises at every turn. From September 2015.