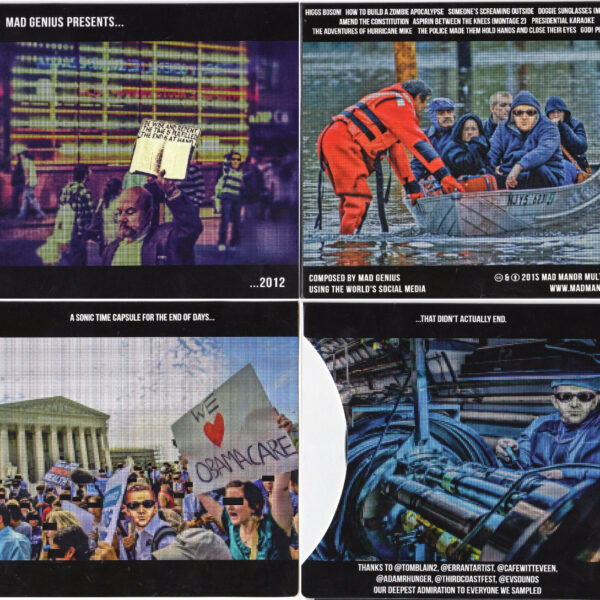 We received Mad Genius Presents…2012 from Mad Manor Multimedia in Madison WI, creators who call themselves “an anonymous collective of found sound addicts”…the ten tracks on their CD use collaged voice samples from the media and intend to create a global portrait of doom, disaster, and civil unrest. It seems all the sources come from YouTube videos published in the year 2012…the original plan of our plucky subversive team was to create a podcast from these materials, and say something about the “End Of Days” – it seems apocalypse culture is still alive and well, nearly 30 years after the publication of Adam Parfrey’s survey. But the Mad Manor dwellers were convinced they had something even more explosive on their hands, and assembled this album in 2015 in response to what appears to be a significant upsurge of interest from the online community. “It was played and shared thousand of times online”, to use their own expression; the present release is a remastered and “reimagined” version of the original internet piece.

From a welter of news reports, satirical and surreal sound collages have been forged, and set to the thumping tunes of disco beats and synth pop tunes with primitive simplistic melodies, the better to hammer home the messages. Among the subjects under scrutiny are crime and urban decay, race relations, contraception, the judiciary, shootings in schools, hurricanes, the discovery of the Higgs-Boson particle, and politics. Mostly American politics, I might add… It’s one thing to present “a sonic time capsule for the end of days”, but apparently this imminent disaster doesn’t apply to the rest of the world outside of the United States; yet the collages were created “using the world’s social media”, implying a more global ambition. This may simply reflect the near-domination of YouTube by American source materials and American commenters, but it tends to limit the range of this would-be subversive statement; and I find it’s already quite limited by concentrating so exclusively on media reports.

As satire, the device of chopping up the recorded words of politicians so they apparently say something contradictory, or rude, is a very old joke; I can’t say that Mad Manor improve on the formula much. A lot of their jokes fall flat because they’re so obvious – hypocritical media discussions on contraception are an easy target, likewise are most utterances of mealy-mouthed CNN presenters and other brash journalists. Some jokes don’t travel; the minutiae of the madness underlying presidential campaigns has been a perennial favourite of American satirists, lovingly detailed every four years by Walt Kelly’s Pogo comic strip in the 1950s and beyond, for instance; but it always baffles me why they think the rest of the world should care so much about it.

I prefer this album when the targets are less obvious, and the intended message far more ambivalent; for instance, ‘The Adventures Of Hurricane Mike’ succeeds in this regard, and amounts to a slightly creepy and unsettling four minutes of frown-inducing sound art. But there are few such moments; and the album browbeats more than it persuades, delivering its “clever” collaged sound-bites and agitated music with the subtlety of a Bren gun, resulting in a wearying listen. Negativland and The KLF are name-checked as precedents, of course, but I still much prefer the subtle and more humourous approaches of People Like Us. The cover art also plays games; it inserts the impassive, sun-glassed visage of Mad Genius into various real-life photos, thus enabling him to stamp his presence across time and space. This is a fairly obvious diluted version of the image of J.R. “Bob” Dobbs and the whole Church of Subgenius trope. From 13 November 2015.