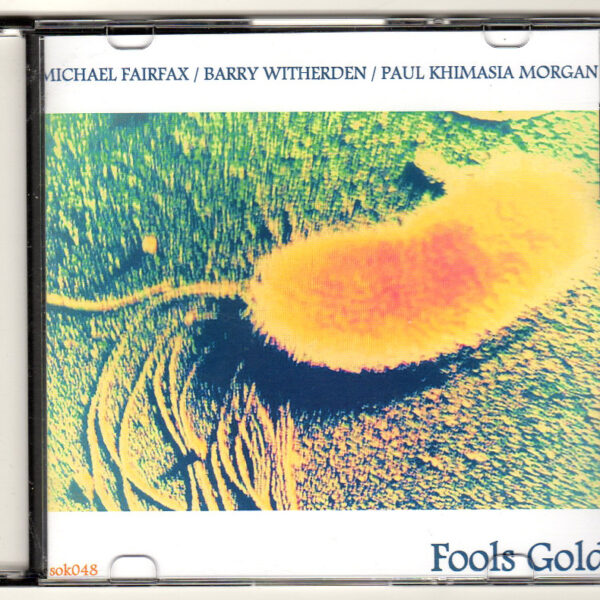 Fools Gold (SLIGHTLY OFF KILTER sok048) is a superb record of abstract noise, created by Michael Fairfax, Barry Witherden and Paul Khimasia Morgan. Fairfax and Witherden are the duo Gimlet-Eyed Mariners, whose 2012 debut album Dark Secret Love we have previously noted. Dark Secret Love was fine work, though perhaps trying out one too many ideas in a single space, and uncertain in places about its general direction. But I reckon Fools Gold is an unqualified success. It’s like a combination of Harry Bertoia sound-sculptures (only much louder and with more presence) with crazed, swooping electronic bursts worthy of 1960s Stockhausen, with a malevolent sub-bass pulse propelling everything along (or rooting it to the spot, if you prefer). This bass pulse is strong enough to be considered as the free-form version of a Lee Perry dub bassline. Fairfax does in fact make sound-sculptures himself, and may be playing them here; Witherden is an experienced improviser with electronic sound, as is Morgan who can be quite devilish with his miniaturised set-up, which uses filters, samples and mixing desk.

Where Dark Secret Love sometimes had percussion loops and aspired to being “lo-fi bedroom warped disco” (as I wrote then), Fools Gold appears to eschew conventional structure in favour of generating, assembling and then deconstructing its own enormous blocks of sound, everyone concerned working with the assurance of an experimental building crew playing hob with derricks, forklifts and cranes as they shift these weighty blocks of stone. While the surfaces are crude and unworked, there’s no denying the gravity and the power; and though the music may be cold and alien, it’s strangely affecting and even a little troubling. The genuine sense of experimentation is palpable in the air. Too many improvisers and sound-artists seem to me to be arriving at foregone conclusions, with pre-programmed events or well-worn techniques, resulting in recordings and performances that can be a shade too “safe”. Fools Gold does something to restore my confidence in the potential danger of live experimentation, and today’s spin is uncomfortable and ungainly, but the music is alive. It’s to everyone’s credit here that these 2013 recordings were recorded live “in one pass”, which to me means without re-takes, overdubs, or editing. Full marks…from 6th November 2015.