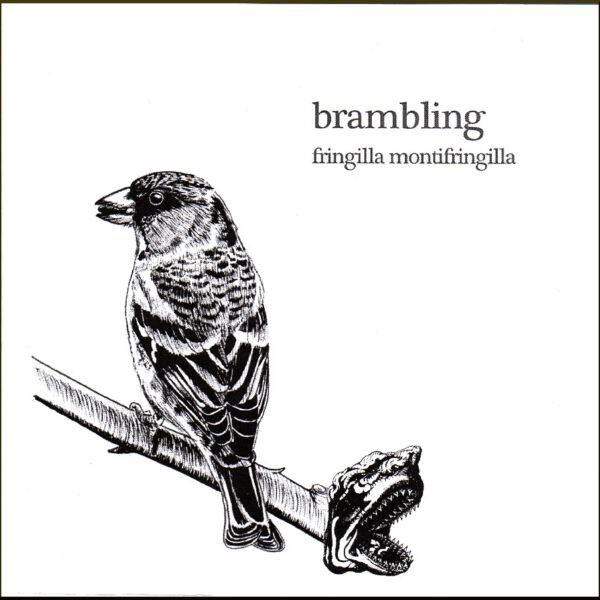 CD of excellent free improvised sound with a pastoral bird-watching theme…the duo are Brambling, an ad-hoc paring of Dan Powell and Paul Khimasia Morgan, and the album has the elaborate title of Fringilla Montifringilla (SLIGHTLY OFF KILTER SOK061), the Latin name given to this small passerine bird of the Finch family. Actually the theme is probably pasted on to the work as a afterthought and in a light-hearted way, since the lengthy track titles (each one a sentence in its own right) are most likely to be cut and pasted from an online bird-watching text. The music has nothing to do with birds…but the idea is probably to make it seem less open-ended and suggest the music is “about” something. Derek Bailey sometimes played similar word-games with his track titles, and sleeve notes, often verging on elaborate pranks at the reader’s expense.

Brighton player Dan Powell is one half of The Static Memories, with Gus Garside. We have previously noted their excellent debut solo album, also released on this same label – a superb combination of electronic and acoustic playing. The Brambling project might not have the exact same aims, as it’s mostly electronic I think – Morgan with his mixing desk and objects, Powell with his guitar and electronics. The duo require lengthy tracks in which to stretch out – tracks 3 and 4 could easily occupy a both sides of a vinyl release – but there is no time wasted with “warming up” or ten minutes of infernal near-silence, which we’re often expected to endure and pay for in the context of modern improv. Brambling appear to find themselves in the middle of something the moment the tape is switched on, and thereafter they spend their time in profitable exploration of the environs. They do so unhurriedly, carefully, almost with a certain degree of caution; but a thorough combing of the turf is what results, with no stone left unturned. As part of this caution, it feels as though the actual sound itself is muffled, restrained; tiny nuances of light and shade are expressed in each note, small details showcased, if you can listen out for them. But neither party is calling attention to themselves or their own performative skills; it is gentle and respectful playing.

If any of the above sounds remotely boring, listen again and decide for yourself; I find something remarkably compelling at the heart of Brambling’s peregrinations, the soft pulses and rise-and-fall motions, not unlike the sound of waves lapping gently at the shore. While minimal and strange, this music is not precious or self-important, and it somehow invites the audience to enter an intimate charmed circle where one can complete the experience, just by listening. Highly recommended. From 6th November 2015.