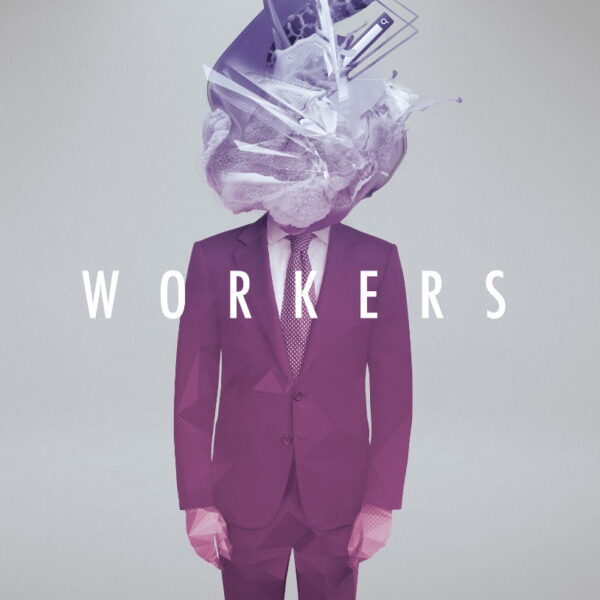 I’m enjoying the album Workers (comfortzone CZ027 / PROGRESSIVE ForM PFCD52) by Mulllr, perhaps because it presents such an unflattering picture of office life and the daily grind of an average commuter, what with its titles grumbling about “crowded trains”, “caffeine poisoning”, “unproductive debate” and “excessive drinking”…the 21 hyper-active tracks seem to be structured in the form of a day in the life, beginning with the morning journey to work and ending with a restless sleep; not a single episode could be described as depicting a satisfactory life. Whether Mulllr is basing this on his own experiences I know not, but he’s managed to communicate something unpalatable about the nine-to-five job, and do so in a more subtle way than, say, Five Day Week Straw People, Crass, or Chumbawamba 1.

Ryuta Mizkami is the Japanese player behind these beat-heavy noisecore glitchfest episodes…although quite new to me, apparently his solo album reputation has been built on ambient experiments such as Init, For Minus Four Nine, and Join’Call, which he self-released on the web as file-based albums. He’s also one part of the trio Motoro Faam, along with Kato Ayumi and Kobara Daisuke, who debuted in 2006 with their IDM / glitch work Fragments. The word “fragments” also ought to figure heavily in any description of Mulllr’s style and practice; his bleak, but not completely despondent, take on modern capitalism and the soulless drudgery of the working life, makes much use of splinters of tiny sound, tripping like tiny artificial jackhammers against the temple of the unwilling wage-servant. Either that, or typewriters…maybe the insistent rattle of computer keyboards in your average open-plan office environment is a phenomenon that can now inspire contemporary music.

The main thing to get across is the disrupted flow of information; it’s clear that our hapless Worker is unable to concentrate on anything, and this constantly-interrupted flow of music, which never sits still log enough for us to discover any melody or underlying pattern, is the perfect soundtrack to represent the unengaged mind, unhinged by too much coffee and warped by lack of sleep. Why, the listener can even imagine an accompanying movie of speeded-up events rushing past the worker as he sleepwalks his life away. Speaking of cinema, if you’ve ever seen the movie THX-1138, with its drugged and complaisant task-force, albums like Workers are enough to make us realise that dystopian vision has sadly come true a long time ago. I suppose it’s kind of an obvious statement to make, and Ryuta Mizkami’s take on the theme is not massively original; the cover image, also the product of his imagination, verges on being a Dada cliché. Even so, it’s a hugely enjoyable record of minimal glitch madness, and the production sheen is clean and crisp. Jointly released by the Vienna label comfortzone, and PROGRESSIVE ForM in Japan. From 30 November 2015.