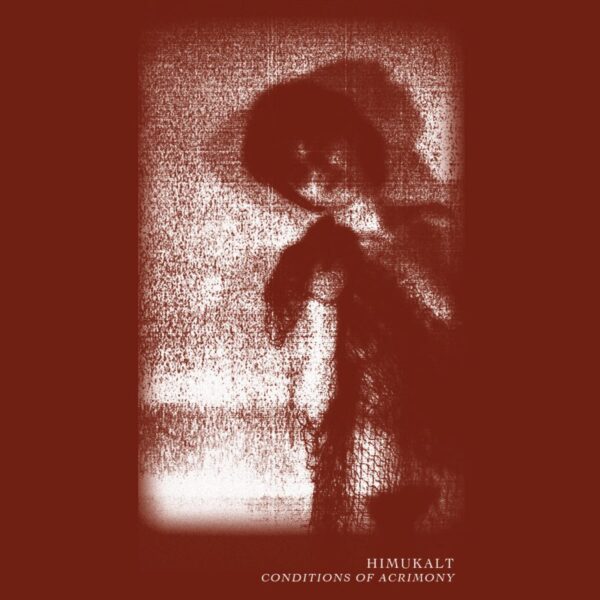 I confess I’ve never heard of Himukalt and its sole member Ester Kärkkäinen before – well, that’s usually the case with at least half the acts I review here, that I don’t know their histories and the recordings of theirs that I pick up are from somewhere in the middle of their discographies – so I had little idea of what to expect. I did have an idea that this release (Kärkkäinen’s debut as Himukalt and in her own right as a solo musician) was possibly a post-industrial throwback to the good old bad old days of late 1970s and early 1980s industrial noise when breaking down and through musical and artistic conventions and taboos to reveal a seamy underside of Western society and its obsession with controlling people’s bodies, minds and souls was the main goal of many in this style of music. This cassette certainly harks back to that mission in its use of distorted and muffled voices that sometimes scream or are reduced to heavy hyperventilated breathing, in the general relentless and brutal machine nature of the rhythms, and in the atmosphere of dread and terror that pervades the entire recording. The cover art is just as confronting, ambiguous and sinister as the music. In short, definitely not an album to be taken lightly at all!

For all that I’ve said though, the actual sounds aren’t difficult to assimilate; they unfold at a steady clip, one after the other mostly, with plenty of uneasy and malevolent background filling the spaces. Some of the most unbearable moments on the album are its most quiet, when the machines have died away and anticipating what might come next is enough to break a torture victim’s will. The noisy parts of the cassette can sometimes be boisterous and a lot of fun to hear, at least until the harrowing vocals intrude and spoil your party.

Both sides of the cassette start with machine-gun rhythm break-outs before diving into their separate paths of juddering noise, sinuous and creepy drones, and that horrid hellish prison bathroom ambience. Though each side has three tracks, the actuality is that once you start on one track, you end up following the tape all the way through, so you may as well play the album right through. Generally the music starts loud to break down your resistance, then progressively becomes quieter, less abrupt and jarring, and ends up deeply oppressive with quietly frying crumble noise and droning effects. The cassette may go out with a whimper rather than a bang; but it’s a whimper that remains with you long after the tape has run its course. Just as so many millions of people killed by oppressive governments over past centuries have died in conditions shut away from public knowledge and which allowed their executioners to scrub out all memory of their tortures and deaths, this tape lapses into a quiet epitaph for them.