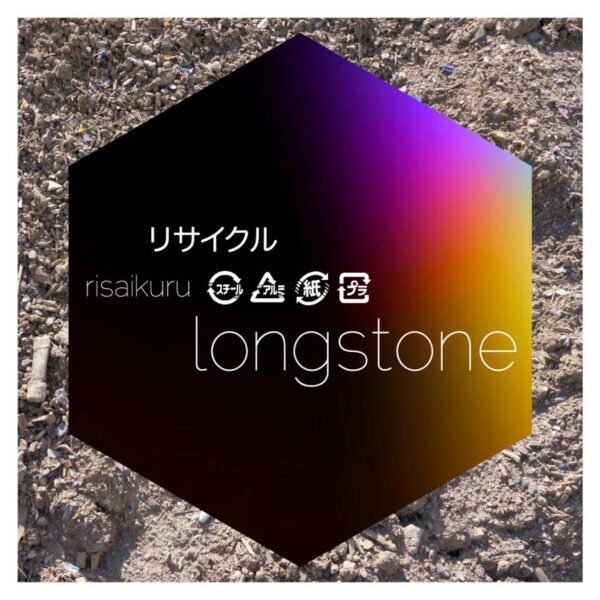 Longstone are one of those groups who’ve always been ‘there’ in the corner of the eye, seldom evoking more than the faint memory of one of their 7”/10”s, bonus CDs on assorted labels or appearances on radio shows like Mixing It. Attentive listening reveals this to be an injustice, but not inexplicable: very much at home are they among loose structures, seemingly disinclined to clear, defining statements when a ‘first thought, best thought’ approach will do. Such caprice guides their hand through bit-crunched Kosmiche and off-colour sound collages that would come across as cack-handed from lesser talents than these fine men, namely mainstays, Mikes Cross and Ward. No exception to this trend is their fittingly titled Risaikuru (i.e. ‘Recycle’) 12”, the latest episode in their ongoing treatment of themes Japanese, following Kabuki (2008), Sakura (2011) and Pavilion (2012).

This is the first however to diverge from explicitly Japanese concepts. Unlike kabuki or sakura, the last time I checked, recycling was quite unknown to many Japanese households, their domestic waste being divisible into ‘burnable’ and ‘non-burnable’ categories. This is a very different kind of recycling. Picking up where the tsunami-themed Sakura left off, Risaikuru sets aside the victimhood typically allocated to those visited by natural disaster, to consider life beyond: on the ingenuity exhibited during subsequent recovery efforts. Like a temporary shanty town constructed from found fragments, this rough and ready assemblage patches together field recordings and blasts of dense atonality, western approximations of traditional Japanese music and other intriguing oddments, mingling and merging like the flotsam it purports to be.

Each member of Longstone (boosted on this occasion to five strong) took inspiration for their respective musical contributions from two photographs taken by Mike Ward in Miyagi in 2013. Neither picture is especially remarkable in itself: Onagawa shows soil, soil and soil. Enoshima depicts the final resting place of tsunami-borne objects upon a hill on the tiny island of the same name. Nor are they evocative of the chaos or trauma of the 2011 disaster. Rather, they represent the cyclical processes of digestion and recomposition that followed the event: the earth that consumes and recycles the dead as new life. This informs Ward’s sequential structure: rather than overwhelm the listener with granulated audio minutiae, he honours his bandmates’ statements by allowing them to proceed uninterrupted. This is collage, not concrète. And he achieves a surprisingly coherent structure given that it accommodates everything from squawking seagulls to shrieking, martial lunges on the shô (the 17-piped mouth organ of Gagaku fame); jerky oriental jamming on a homemade cigar box guitar and idyllic, electronic, rain-dappled dithering. Each contribution contributes to the magical sense of Japan, one perhaps envisioned in the limited colour range of ukiyoe, and infused by some Divine Wind.