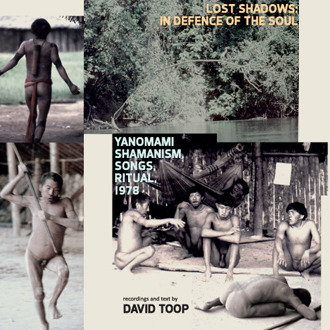 Lost Shadows: In Defence Of The Soul (SUB ROSA SR379) is two CDs of Shaman songs recorded in 1978 by David Toop. The Yanomami, whose music this is, live in a few hundred villages scattered around the border of Brazil and Venezuela, between the Mavaca and Orinoco rivers, in the Amazon rainforest. The Yanomami believe in spirits – everything has a spirit, good or bad – and they celebrate all the important things in life and death through their rituals. A Shaman is specifically called in to cure the sick; hallucinogenic drugs are sometimes involved, I believe, to assist the Shaman, and through his efforts he will drive away the evil spirits of disease. The rituals involve singing and dancing, and the sound of all this is what ended up on Toop’s Sony stereo cassette recorder. He did it with the help of Brazilian singer Nestor Figueras; you may recall Toop and Figueras, and the drummer Paul Burwell, made the unusual album Cholagogues for Bead Records in 1977, reissued on CD in 2009 and noted here.

Toop’s interest in ethnic music at this time is reflected in the original LPs he published for his own !Quartz label in the late 1970s; they include Sacred Flute Music From New Guinea: Madang and Windim Mambu and Sacred Flute Music From New Guinea: Madang Vol. 2, both recorded by Jessica Mayer and Ragnar Johnson. His own Hekura – Yanomamo Shamanism From Southern Venezuela was issued as !Quartz 004 in 1980 and presumably contains some of the same recordings; this 2 CD set may be more like a very expanded reissue. Included in this release there is a dense booklet of photographs and notes written by Toop, which would probably shed a lot of light on what the recordings mean and why he made them; but I haven’t read these notes, and will leave these added dimensions for others to discover. It might make sense to view this release in the context of the !Quartz label, which was intended as a label for representing both ethnic music and improvisation, and perhaps for some undefined space that hovers in between these two worlds. The 1979 album he made with Paul Burwell, Wounds, seems to want to get closer to that space; the cover art, notes, and choice of instruments on Wounds suggests that much to me, as does the fact that album makes use of the same cassette tape from Continamo Falls that he made on his Brazil trip with Figueras.

The sounds on this record are quite astonishing. At first one is put off by the strangeness of the grunts, sneezes, guttural coughs and such, and then alienated by the unfamiliarity of rituals which are pretty much unknowable to us. But then as you listen more, you get the sense we might have more in common with the Yanomami than we think. When the rituals really do lift off – which isn’t very often, to be honest – you hear a dramatic moment taking place on the tape which any musician would be proud of, except it’s probably not even meant to heard in that way (or heard at all). At such moments, there’s no doubting the truth of the spirits these Yanomami believe in. My other observation is more banal, and that’s to note something about the ordinariness of the situation. I am sure trance states are ecstatic and amazing things, but on these recordings, Shaman rituals sound like bloody tough work; those involved are really exerting themselves, not simply waiting for the trance state to bless them like a visitant from the Heavens. If I am right, the other priests are assisting in this strenuous effort, to make sure of a good ritual and a good healing outcome. Entire families are present; young children are not kept quiet, as they might be in a Western church, and there’s almost a family atmosphere in evidence during these ceremonies. This, for me, interestingly blurs the edges between the sacred and the quotidian, in ways that perhaps we could learn from. Any time and any place is good for a prayer; let’s just get stuck in and get the work done. If that’s the Yanomami motto, I’m all for it. From May 2015.