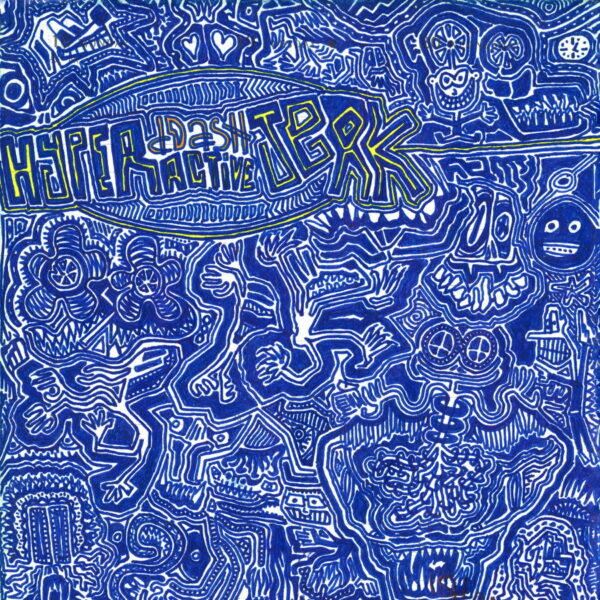 As I see it, Ease-Up Jerk appears to be a more easily available version (to us mere mortals anyway), of the Hyperactive Jerk vinyl album, which briefly teleported into this plane of existence with a run of thirty-six copies, numbered by manicured hand and with covers screened of the finest silk. dDASH are a French electroid/nth gen. new wave project who’ve cut discs for Planet Mu and Tigerbeat6 amongst a few others and is manned by J. B. Hanak (see also membership of Sleaze Art and heavy metallers Cobra), and his brother Fred. Thing is, Fred isn’t credited as a player here…so…a one-man show it is then.

For the past decade, they’ve been a visible presence within the French underground, choosing occasionally (for reasons unknown), to morph into other organisms like the punning Boulder dDASH and the not so punning Evol d. Dopa. Though whether these offshoots offer up different instrumentation and conceptual blah, I simply have no idea. The dozen tracks trundle along in a pretty much linear fashion, pneumatic drumbox to the fore, with Factorial bass lines dutifully following along in its wake. “Animal Machine” and “Monkey Monster” kick up prerequisite amounts of dust and what have you – all throat strangulations and fat ‘n’fuzzed-out guitar arrogance. Needles back pedal from fire engine red to a cuter pink with “Prostitutes” and “Shiny Day” in which this particular J. B. takes it to le pont with a plastic soul near falsetto that’s surrounded by an almost radio friendly ambience.

If anyone out there seeks to track dDASH’s lineage back to their fellow countrymen of a synthpunk past, ‘specially the Metal Urbain family tree (Metal Boys, Dr. Mix etc.), I’d be reluctant to give that the thumbs up. There’s less indication of broken glass and civil disobedience in evidence here. Perhaps the cribsheet’s pointers towards the Sub Pop and Amphetamine Reptile empires would be a more accurate target? Maybe.