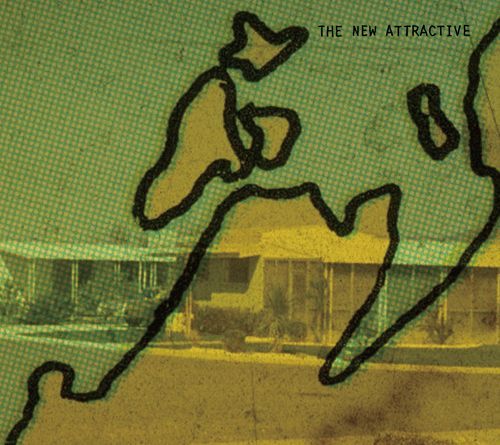 Another exceptional record of intimate, unusual, noisy improvised electro-acoustic music from Tim Olive is The New Attractive (EM RECORDS EM1139CD). Olive has always had an uncanny flair for seeking our strong collaborators, like-minded souls with whom he can share the joy of music creation, and on all such endeavours I’ve heard there is always refreshing lack of ego, none of the conceitedness and bombast you might get with some of the big names of the avant-festival circuits and their promiscuous groupings. The collaborator this time is Takuji Naka, who has only surfaced once before to our knowledge, on the 2011 record Situation Vacant Columns for Para disc, where he played reed instruments in the group Culpis. Naka recorded and mixed The New Attractive in Kyoto.

Their performances here are an uncanny blend of Olive playing his magnetic pickups, and Naka playing a spring reverb device and selections from his library of cassette tapes. What he does with these tapes is fascinating…low-key, understated fragments of documentary sound are deployed with the sensitivity of a water-colour miniaturist, carefully and sensitively exploring tones and timbres. I like the printed description on the obi, which alludes to “out-of-date sound sources”; a phrase which might refer to the cassette player itself, a machine some regard as near-obsolescent, or to the recordings themselves, which are perhaps stored on fragile decaying magnetic tape, and about to expire – hence “out-of-date”. What we hear in these five episodes are exciting and tense tangles and knots, tiny battles where the gentle tape drift is pitched against the tide of the near-brutal grunts and slams produced by pickups and the spring reverb, generating wayward and juicy feedback eruptions. Incidentally it’s great to see Tim Olive continue his quest to “deconstruct” the electric guitar, if that is indeed what he’s doing; he’s eliminated the strings, neck and body and got it down to just the pickups, so what will he jettison next?

The release is decorated with cartographic speculative sleeve art by Olive, and arrives with a thoughtful sleeve note by the writer and musicologist Yu Wakao. His take on the much-discussed history of “noise music” is one of the most refreshing I’ve read…full of useful questions and speculations instead of the aggressive assertions we usually get from self-appointed experts in this area. He also mentions the 16th century scientific tract on magnetism from which this release takes its name. Very high recommendation for this beautiful piece of forward-looking, inventive and unusual noise. From 20th January 2016.