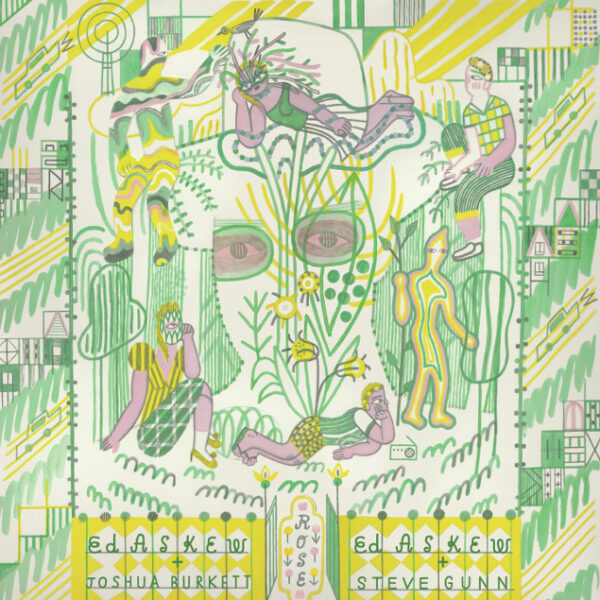 From November 2015, we have a set of 10-inch vinyl releases on the Belgian record label Okraïna, run by Philippe Delvosalle. All of them are decorated with colourful illustrations by Gwénola Carrère and are quite sturdy little packages. Already I feel a certain warmth and old-school charm verging on the quaint, with a visual art style which I can only describe as an emulation of a nameless “between the wars” style before modernism truly arrived. Also a sense that I ought to be cranking up my hand-wound Victrola to play these sides. They don’t play at 78 RPM, but I feel they should.

Rose (OKRAÏNA #4) features two ten-inchers, both showcasing the work of Ed Askew. This American singer-songwriter is an underground folk hero to many, his reputation based to some extent on his 1968 record for the hip New York label ESP-Disk, an album variously titled Ed Askew or Ask The Unicorn. Its original cover art had the photo accidentally printed in negative; only the UK Fontana issue managed to get it right. Here, Askew is paired on the first disc with Joshua Burkett, sometimes called Yellow Beard, a contemporary hero of acoustic folkish song; his Gold Cosmos is one record I do recommend, but he’s been making other albums of interest since 1995. What we hear is a 2007 radio set recorded for WFMU, where Askew’s songs are interspersed with informal chat about his compositions and his albums’ history. The date coincides with the release of Little Eyes in 2005, one of his “comeback” albums, and some songs from that release are featured here. On the second disc, Askew teams up with Steve Gunn, a talented young guitarist from Landsdowne in Pennsylvania, and the duo perform a number of songs for another radio slot, this time from 2010, on the Greg Healey show. Nothing wrong with any of the music here, but Askew fails to excite; he lacks the fire or invention of Peter Stampfel, a true Lower East Side maverick beatnik, and is somewhat closer to the melancholic whine of Tom Rapp of Pearls Before Swine, but without any of Rapp’s acerbic bite. I mention both of these as possible contemporaries of Askew, and as ESP label-mates. Askew’s not one for melodic invention, or an original guitar style, rarely straying outside simple chord changes and progressions; and some of his lyrics may appear mawkish. But there’s no denying the sincerity of his intention, and the distinctive contours of his voice, even after 40 years, continue to exhibit a certain odd charm. 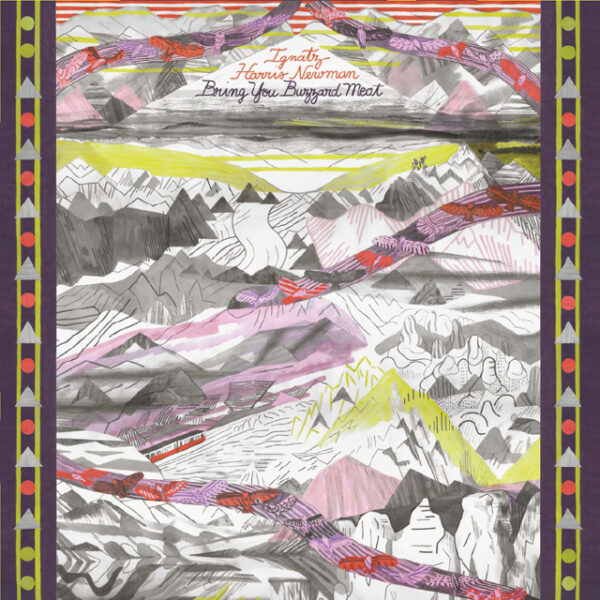 Bring You Buzzard Meat (OKRAÏNA #3) is a team-up between Ignatz and Harris Newman, and is a 2008 studio recording; it was originally sold as a tour CDR in 2009, and is reissued on vinyl here. Belgian singer Ignatz (i.e. Bram Deven) first came our way in 2005 with his debut album for the K-RAA-K label, but the Canadian guitarist and studio engineer Newman is a new name to us; I see he’s made a few albums for Strange Attractors Audio House. The two met at a music festival and found they had a lot of common ground; a few live shows have resulted from their pairing. The five tunes here were performed with various guitars – electric, lapsteel, acoustic, and sonically speaking there’s a rich range of steel-string textures on offer here. The real innovation has been to combine this traditional folky guitar sound with an analogue synth, which on occasion – particularly on the astonishing ‘Political Song for Carla Bruni To Sing’ – creates a hair-raising, abrasive experience for the ears. The title track however is rather pedestrian circular noodling and finger-picking exercises, like a bad version of Leo Kotke; and the languid atmosphere of ‘Rise While You Fall’ is singularly lacking in tension, despite the attempts by the duo to foster a tone of melancholic doom with the hollow singing and the reverb effects. ‘Stray Dog’, with its treated surfaces, halting rhythms, and uncertain vocal moans, may come closest to realising the duo’s plan, which appears to be some sort of futuristic update on Country Blues idioms; at any rate, the label blurb calls it “equal parts science experiment and Geechie Wiley tribute”. I’ll give them a bonus point for name-checking Geechie Wiley, but next time when I order buzzard meat, please don’t bring me these slices of warmed-over turkey breast. 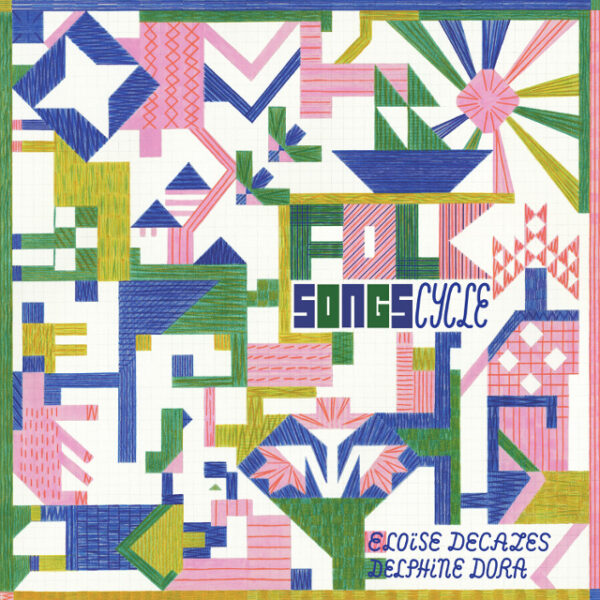 Folk Songs Cycle (OKRAÏNA #6) is performed by the singer Éloïse Decazes and the keyboard player Delphine Dora, who plays piano and harmonium, adding occasional vocal harmonies. The 11 songs here are from an arrangement by the 20th century avant-garde composer Luciano Berio, who originally composed them for his wife Cathy Berberian to sing, with orchestral accompaniment; I imagine this proved quite a popular seller when issued as an LP on the RCA Red Seal label, though it’s equally possible audiences are divided. Something of the utter simplicity of the folk song is arguably lost when transposed to this faintly pompous classical setting, and Berberian’s performances can appear stilted. Decazes and Dora are anything but stilted, and they have clearly made a determined effort to return folk song to its basics, so these intimate recordings were realised with just one or two voices, with a piano or harmonium providing a very simple setting. The record is thus quite direct and has a homespun charm; at times, the women might almost be in their own front parlour at home, not recording for an audience. Neither of them has a particularly forceful or distinctive singing voice, but for the material they’re working with, this isn’t an issue. While I’m not about to sell my records by Shirley & Dolly Collins (listen to them if you really want to hear what you can do with a heavenly voice and portative organ or acoustic piano), these two girls from Auvergne are sure to find a place in your heart with their unaffected approach. The sleeve art resembles a sampler, which seems very much in keeping with the spirit of the work; I can almost imagine these two wearing hand-embroidered smocks at home! Éloïse Decazes made another record for this label with Eric Chenaux, now sold out, but you can hear the tracks on the Bandcamp page. 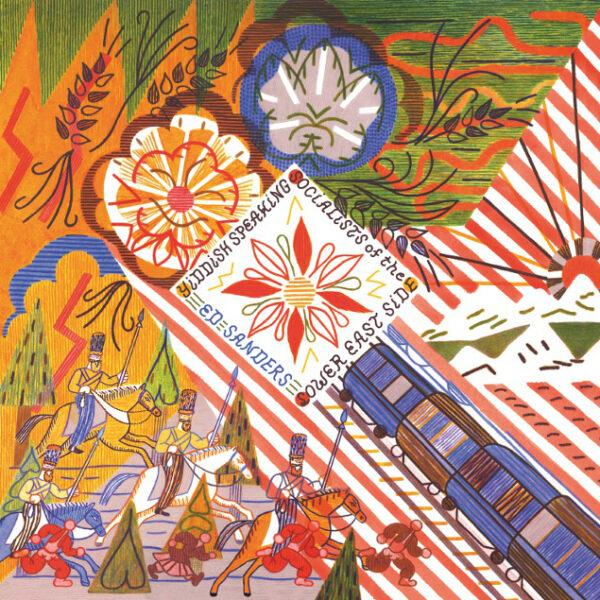 Lastly, we have an unusual song-recit essay piece by Ed Sanders, called Yiddish Speaking Socialists of the Lower East Side (OKRAÏNA #5). This item originally saw light in 1991 as a cassette tape, so this reissue is its first release on vinyl. Ed Sanders is yet another ESP-Disk alumnus, famed as co-founder of The Fugs, although it’s Tuli Kupferberg who was arguably the more abrasive and agitational of this counter-culture duo; his 1967 solo album No Deposit No Return is a crazy record of subversive poetry formed from cut-ups of popular press adverts. Here, Sanders is telling a history of Jews settling in New York, doing so in a mixed style which is part narration, part poetry, part singing; he accompanies his vocals using a home-made electronic instrument which he calls the pulse lyre, and the melodic range throughout is severely restricted. Perhaps by accident, all of this tends to give the sensation of an excerpt from a lost opera by Robert Ashley. Yiddish Speaking Socialists follows a political bent, so you can expect references to Ellis Island, sweatshops, and various social injustices, and anecdotes about these recounted in a fairly stark manner; it seems that Sanders, like Robert Wyatt by the time he made the record Old Rotten Hat, wants to make sure his left-wing messages are in no danger of being misunderstood, so utter clarity and precision of expression is the order of the day. There’s also an overwhelming slew of historical detail; at the end of 20 minutes, you’ll feel like you’ve read an entire book, or had one read to you. This “personal essay” style is an intriguing song form, and it might be interesting to see what other poets and songwriters could do if they followed a similar approach. For the cover artworks, Gwénola Carrère has gone the extra mile in her attempts to illustrate and amplify Sanders’ themes, an effort which I do applaud, even if there is the risk that she is trivialising the serious issues into colourful innocent-seeming story-book images.