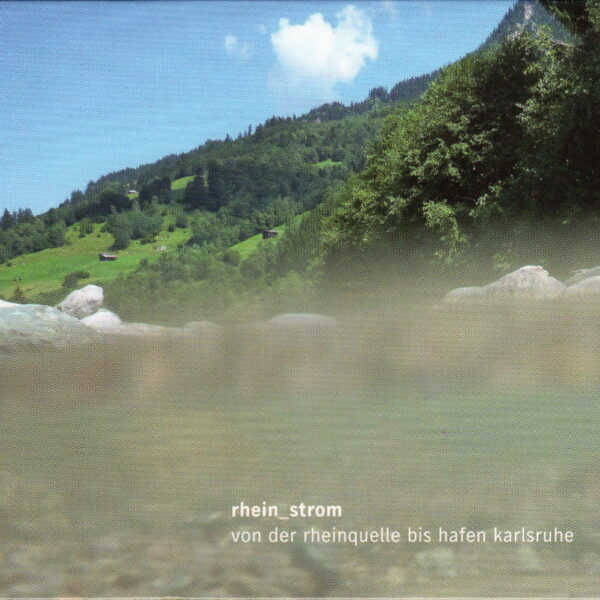 The field recording record Von Der Rheinquelle Bis Hafen Karlsruhe (GRUENREKORDER Gruen 163) is credited to rhein_strom, but is in fact the work of Lasse-Marc Riek, the label boss Gruenrekorder; he did these field recordings of the Rhine river, while his collaborator Thomas M. Siefert was the “location scout” – a role which sounds not unlike something you’d expect in a move production company – and took the colour photos which appear in the foldout booklet.

Across 21 tracks which segue into each other, we have a detailed sound map of the river, one which is illustrated by a very precise schematic time-line / diagram included in the printed insert, telling us where we are on the stations of this journey; in structure, perhaps, not unlike Annea Lockwood’s Sound Map Of The Hudson River, which she undertook in 1982. Lasse-Marc Riek also adds one or two conceptual layers to the work; one textual inspiration was a book called Rivers Of Central Europe by Joachim von Konigslow, a work which traces the history of mankind’s relationship to rivers. We used to think the river was a God; then we feared the river, when it brought floods and disease. Now we exploit it, harnessing the energy of the river for transport and power generation. “How can we…forge new relationships with the River Rhine?” asks Riek, perhaps intending this release as one potential response to that profound question.

Like Christina Kubisch with her Unter Grund (noted here), he’s worried; concerned about the ecology and the long-term effects of our destructively-interfering with nature. He calls them “irreparable interventions”, suggesting that the damage we do is irreversible. But in seeking out zones of unspoiled pastoral beauty along the river Rhine, he doesn’t want to turn himself into some 19th-century Romantic landscape painter swooning over deserted vistas, nor presumably become a soppy tree-hugging ecology nut who bursts into tears whenever another acre of forest is cleared for a housing development or to create more cattle grazing land for cows which are destined to become McDonalds hamburgers. Von Der Rheinquelle thus might be read as a spare, unsentimental look at the beauty of nature, through sound; and a journey that’s informed by questions and uncertainty, rather than a lecture proceeding from foregone conclusions.

As to that uncertainty, the word-game he plays on one page of the booklet, taking the reader from “rain” to “ryn”, may indicate the multi-layered thinking he’s been doing on this subject. It’s a series of puns, multi-lingual, almost a concrete poem; a rebus that somehow encompasses more than just a river and its names. While this record is gorgeous to listen to (all these Gruenrekorders are pretty much recommended listening), it also communicates a conceptual depth that makes it even more compelling, inviting us to consider our own relationship to nature, to the environment, and what it means. From 26th January 2016.