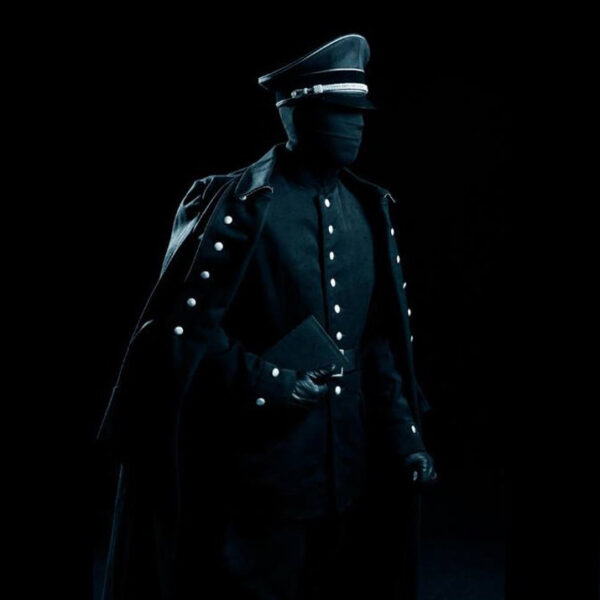 As no doubt fans of the Paris-based industrial BM band N.K.V.D. already know, “Hakmarrja” is the Albanian word for “revenge” but we should not infer that revenge is the main theme or one of the themes of this, the project’s second album and third major release. It probably could have been though – if there’s any society around that knows all about revenge, continuous payback from one generation to the next and institutional vendettas lasting centuries, then traditional Albanian folk culture has the copyrights on those traditions – because the album itself, in spite of the track titles suggesting separate songs with their own themes and narratives, comes over as one whole work that varies very little from one track to the next. (The band’s name refers to the Russian-language acronym of the law enforcement agency that existed during the later years of Josef Stalin’s rule in the Soviet Union and which performed both routine police duties and tasks of a more sinister stereotypical secret-militia kind including kidnapping and killing people abroad.)

After an introduction of excerpts of various recorded speeches dating back to the period of Vichy France (1941 – 1944) in “Exordium”, we’re thrown into a world of deep black industrial horror: of inhuman, even demonic machine voices, grinding bass rhythms and jackhammer beats, oppressive atmospheres and spoken-word recordings from recent historical episodes in which police state terror ruled. The songs are all hard-hitting and monstrous in style. Yet for all that, however hard they try to impress, as the album progresses, the songs tend to sound more sensational and bombastic than thought-provoking and they fail to evoke feelings of horror and revulsion.

However much I try listening to this album, I end up getting lost about halfway through and have to struggle to the very end. The whole recording is a mess of ugly groaning monster vocals, uninspired machine rhythms and very little variation in atmosphere and emotion from one song to the next. If it were not for the lyrics, the songs would give no indication of what period of history they’re referring to: I suppose this might be N.K.V.D.’s way of saying that totalitarian police state rule knows and respects no culture or cultural traditions – but still, the odd reference to Serbian, Albanian or Ukrainian settings by way of brief sprinkles of folk music from those cultures before the jackboot comes smashing down on them might help buoy listeners.

At this point I start to wonder what the purpose of N.K.V.D. is, as it’s simply not enough to issue album after album of travelogue music through historical time and space just picking out countries labelled “totalitarian” or “police state”, as defined by Western history books. Listeners eventually will want to know what N.K.V.D.’s motives are, what the project’s real interest is in trawling through the history of authoritarian regimes, and whether the project will investigate how and why these regimes became what they were, when did they stop being authoritarian and why, and what political, cultural and economic conditions existed that encouraged the rise or fall of such governments. If we knew what all these were, we would be armed with the knowledge to prevent such regimes or to hasten their end, and N.K.V.D. among others would have performed an immense service to us all.