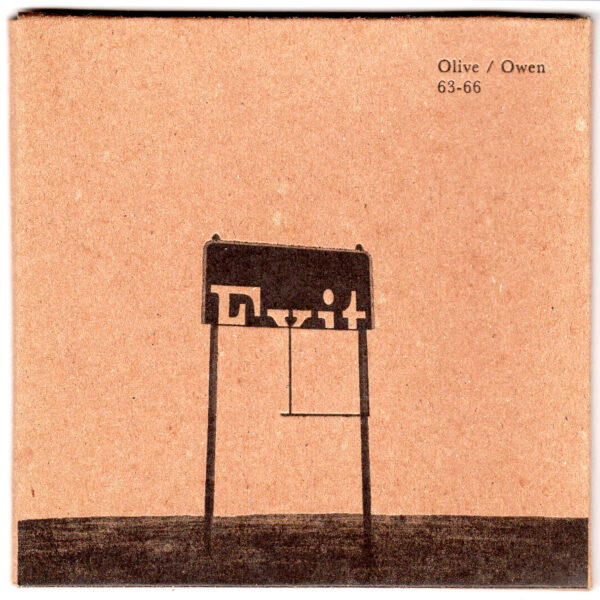 The enigmatic record 63-66 (845 AUDIO 845-6) is a team-up between Canadian Tim Olive and American sound artist Ben Owen. Owen is the fellow behind winds measure recordings, a New York label that has been doing its utmost for many years to bring new dimensions and resonance to the idea of “lower case music”, and has always presented its releases in very attractive minimal letterpress sleeves created by Owen. Since we haven’t heard much from him or the label of late, this is most welcome. I tend to characterise him as a questing sound experimenter who starts from ideas and concepts, whereas Tim Olive usually starts with performance and improvisation, even if he ends up in strange places as he follows his nose (and his magnetic pickups).

They clearly find common ground on this occasion, though. Enough common ground to build a skyscraper, or even found their own city. Each track explores a particular texture, sound, idea, or ambience, and does so thoroughly and patiently. The circumstances of production are not revealed, and the mystery of what we might be hearing only adds to the enjoyable tension. By Olive’s standards, this is minimal; by Owen’s track record, this is one of the most maximal records I’ve heard from him. Compelling small sound events unfold in careful fashion, each man giving the utmost respect to the other, and leaving space for ideas to grow. Extremely exploratory sound, with nothing to prejudice or divert the task from its goal, no pre-ordained expectations about where the vessel may be directed. As listeners, we need to be patient, but we needn’t feel we are eavesdropping on a private conversation; it’s more like observing a small but wonderful natural event, like the birth of small birds or the unfolding of rare flowers, in minute detail.

Recorded over two sessions in Brooklyn in 2014, released on Olive’s label with a trademark Owen embossed cover. The image of the “unfinished” Exit sign on the cover neatly encapsulates at least two ideas of what this music might mean. One is that there’s a certain ellipsis, of matters left unstated for the audience to complete in the mind. Another is that this open-ended abstract sound offers an escape route away from conventional thinking, or from restrictive musical genres. From 20 January 2016. The same package included The New Attractive, and what I take to be a vintage Japanese postcard from Olive.