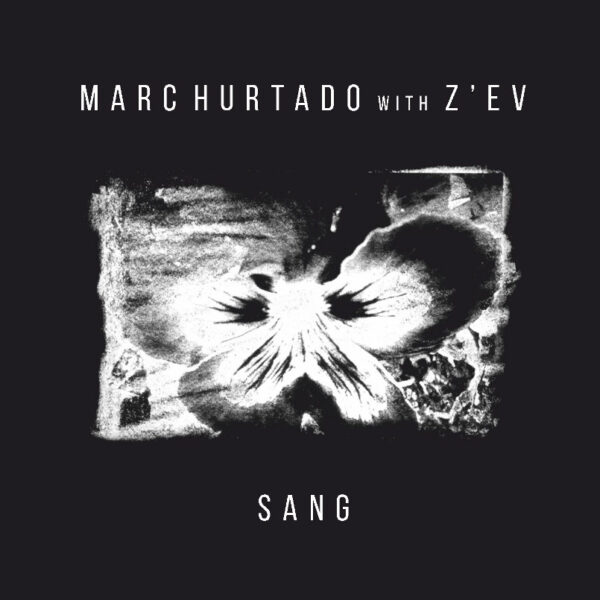 I never really heard much from Étant Donnés when they were around in the 1980s and 1990s, apart from perhaps the occasional compilation track, but main man Marc Hurtado has come our way before when he teamed up with Vomir to produce 2011 – a powerful sonic event where Marc really had to shout at the top of his French lungs to make himself understood over the ferocious roar of the Vomster. Given other collaborations of Étant Donnés with Lydia Lunch, Genesis P.Orridge, Michael Gira and Alan Vega, it makes perfect sense that he should team up with Z’EV, that notable exponent of cabbalism, percussion, voice experiments and general controlled mayhem, and their collaboration has resulted in Sang (MONOTYPE RECORDS MONO101).

Both Hurtado and Z’EV are important figures which we can safely say have transcended the so-called “Industrial” genre, and as living breathing entities continue to create unclassifiable music and sound on their own terms. Sang is probably more than just a record, but an integrated artistic statement where the poetry and images of Hurtado form an integral part of the package, communicating in multiple directions. Sang is also a much less noisy proposition than 2011, and Hurtado emits his cryptic, compressed utterances in more of a forced whisper, croaking stark messages out from between parched and cracked lips, like a holy man who’s been out in the sun for 30 days. No defiant hurlements against the cruelty of the world, but a lost and lonely resignation inhabits his voice.

Z’EV’s percussion work is quiet, understated – but still equipped with a steely core of resilience, adding just the right degree of semi-apocalyptic menace to each cut. Hurtado – credited with “instruments” – adds equally minimal interventions using perhaps keyboards, electronics, or any handy method to billow forth clouds of abstract moodiness and uncertainty. In just 15 minutes, the listener will be lost in a fog of existential doubt, with only a few half-understood spoken phrases to use as a compass. Hurtado understands the power of simplicity in his words, that’s for sure…that and the power of repetition. Each piece could be an amalgam of French intellectual philosophy by Debord and Deleuze, pre-surrealist decadence from Baudelaire and Mallarme, the cinema of Jean Cocteau, sound poetry by Henri Chopin, plus the faintest trace of rock and roll sleaze filtered through the bare and bleeding torso of Alan Vega.

Marc and Z’EV never met up for this sonic enigma, but recorded their respective parts in France and London, allowing Hurtado to do the final assembly in his Fire Music Studio. A terrifying red and black exploration into the lower depths of human subconscious…From 21st January 2016.