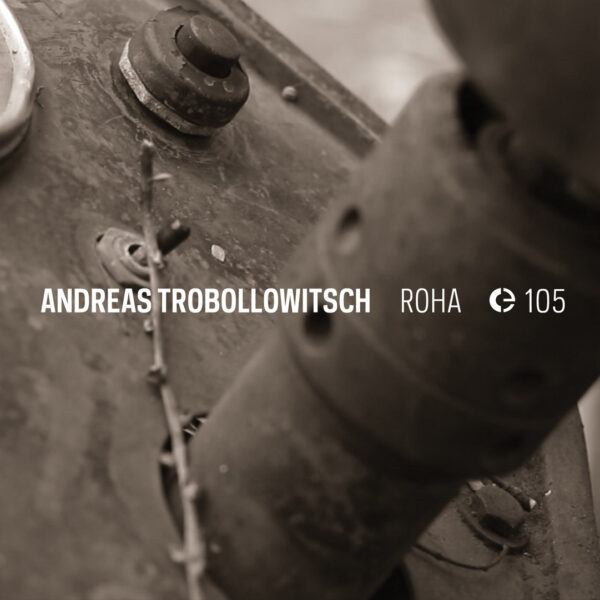 We’ve heard from Andreas Trobollowitsch some time ago in 2009 as one half of Nörz with Johannes Tröndle; their record for Schraum struck me as “disconnected electro-acoustic sounds…thrown into a cardboard box which is gently rattled about”. Trobollowitsch continues his explorations into electro-acoustic composition solo now, with Roha (CRÓNICA 105-2016). On these eight pieces, the starting point is always a conventional acoustic instrument or two, usually played by himself, though drummer David Schweighart helps on one track and Manuel Brunner plays the double bass on ‘zain’. He also makes use of feedback, electric fans, and some home-made instruments. Once recordings are captured, he uses them as “basic materials” to build a composition, through a process of combinations and edits and much careful selection.

This is pretty much the “standard” (if we can call it that) method of creating musique concrète as developed by Pierre Schaeffer from 1949 onwards, except that Trobollowitsch presumably doesn’t use magnetic tape but digital recording, like everyone else these days. He’s also not much for radical reworking or transformation of the sources, and it’s fair to say that for at least 50% of the time it’s quite possible to recognise many of his original sound sources, their acoustical organicness showing through and indeed blending into the digital twistiness. If I’m halfway right, this might place him at some distance from the current Canadian school of composers, who seem to use every digital effect at their disposal to create unrecognisable, alien, and over-processed sounds in their sweeping endeavours. This Viennese fellow by contrast has a certain starkness and precision to his sounds that the ear can engage with, and the air crackles with tension and dynamic force.

The actual compositions are not quite so bold; for some reason the ideas feel a little under-developed, quite often simply repeating the same basic structure which tends to contrast two or more unfamiliar sounds against each other, hoping that through this friction, the fur will fly. While the first 60 seconds produce a tingle, by the end of four minutes I’m wondering what he was trying to communicate. Despite this hesitancy, a good effort from Trobollowitsch. Arrived 11th February 2016.