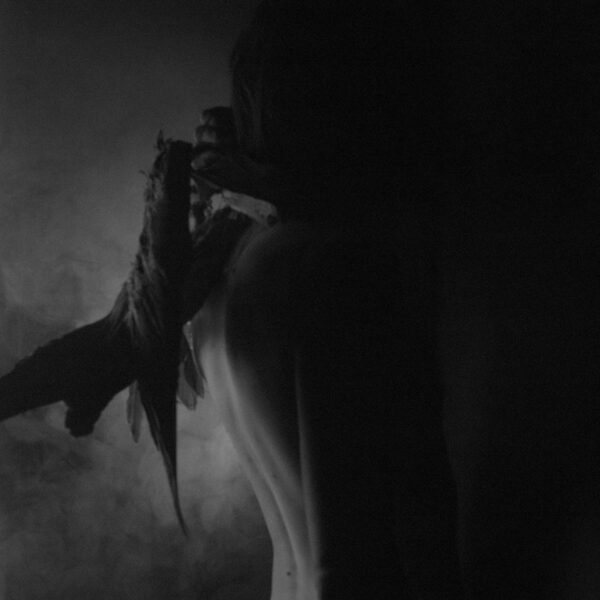 Originally “Amissum” was released independently as an EP with 4 tracks in September 2015. Since then, Polish label Hellthrasher Productions has picked up the recording and added two tracks including the title track for a limited edition full-length version which was released in March 2016. This review is based on the new 6-track version. Chaos Moon is a brainchild of Alex Poole aka Esoterica who also heads another black metal project Skaphe (a couple of whose releases, both self-titled, I’ve reviewed here) and who has been involved in other USBM bands including N Imperial’s Krieg and Lithotome in the past.

With a CV like that, Chaos Moon’s “Amissum” should attract some very high expectations and moreover fulfill most of them if not all. At least you’d want to hear evidence of great song composition skills, a high and consistent level of playing (even if Esoterica has to use programmed drumming) and a fairly polished production with a good balance of raw feel and texture, and a clear and clean sound where needed. Chaos Moon’s musical and lyrical aims should be different from those of other bands Esoterica has played with and these would be reflected in the style of music. (Maybe not too different but different enough to justify the existence of Chaos Moon.) With Skaphe, I’ve come to expect confrontational and immersive fusion BM psychedelia horror which aligns with that band’s concentration on themes of abandonment and desolation. What can we expect from Chaos Moon?

As it turns out, we can expect a lot as “Amissum” takes us on a forceful and aggressive ride through highly atmospheric and intense BM with moments of doom and dark psychedelia. The title track sets the scene with a very dark and moody ambience against which are set a guitar choir drenched in showery reverb, a sinister looming bass and shuddering walls of programmed percussion. The instruments create a monumental fortress of vibrating, sometimes thundering and sharply acid sound with bursts of blast-beat frenzy. The vocals are crabby and nothing out of the ordinary, and are the weakest element here; something more icy, harsh, desperate and crackling might have suited the music better.

The “Resurrection” trio of tracks can be epic and stupendous with a constant acid buzzing sound and the same dark shadowy ambience as on the title track. The singing is a huge improvement with screams, howls and rages in the far distant background. Now there’s more emphasis on melody, distinct and catchy riffs, and the creation and maintenance of a deep bottomless black space from which armies of juddering tremolo guitars burst suddenly and hordes of ghostly voices let rip with cries of despair and damnation. The music alternates between sedate and doomy on the one hand and fast, almost old-school melodic BM on the other; the third track especially develops into a huge solemn juggernaut of wailing, thrumming sound and drone wash. Sections of dark ambient sound where low-end synth drone murmurs or guitar feedback generates a storm of high-pitched howling noise wash bring unease and a sense of total despair and hopelessness. This set of tracks would have been much improved if the music had flowed from one track into the next without any breaks (and those replaced by ambient passages of heavy dread).

The last couple of tracks are more accessible to listeners with more singing and melody and less stress on manipulating sound and atmosphere to build up an elaborate edifice. “To Transcend the Spine” has its moments of groove-tastic rock’n’roll but even here guitar and synth wash are prominent, and occasional clean-voiced singing, swathed in echo, bring in a post-metal feel into the heavy veils of blurry sound. The final track is a straightforward BM song powered by thudding blast-beat fury.

The songs are all good and the “Resurrection” tracks especially can be incredible but what really stands out here is the distinctive style and sound of the music: sometimes aggressive, sometimes epic and powerful, reaching from solemn and doomy to super-fast, and always covered in that mysterious and dark patina of acid guitar textures, misted percussion and looming bass. A grave presence, deeper than Hell, lurks behind the music. The songs are varied in their structure, some more conventional and song-like than others, so there is plenty to please most listeners of intense atmospheric BM who might also like to feel grounded in a traditionally styled song now and again. There has been news that a new album “Æschaton Mémoire” is in the works so listeners are entitled to expect a lot from that upcoming release.