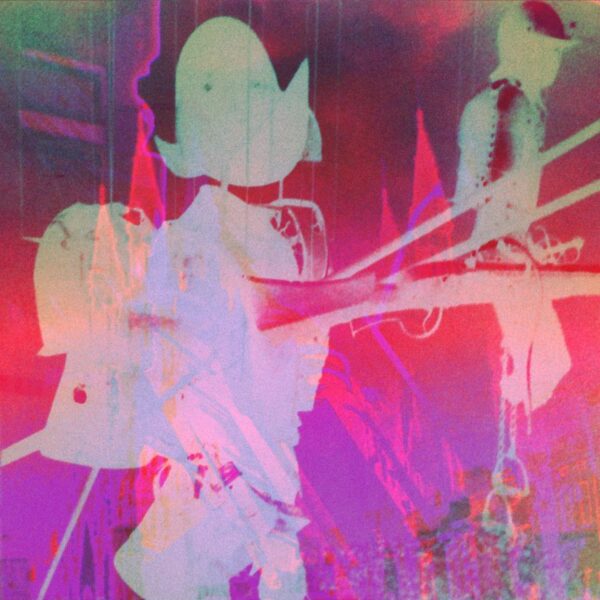 When I got this cassette in the mail, the gaudy colours of the cover art and the neon-light stylings of the album title and artist credits should have been warning enough that I was going to be treated to some really surreal retro-electro-synthesiser soundscapes. And sure enough, from start to finish, all the way through, without pause or even a few micro-seconds of white-noise relief, this recording takes you on an extended journey through some amazing electro-disco vistas of wobble bubble drone, soaring tone and clappy-clappy percussion beats. To think that the fiend behind this tape, one Andrew Douglas Rothbard, created and recorded this incredible universe of mind-melting sound art on his own – yes, all of it sprung from his feverish, fertile mind. He builds the music with layer upon layer of modular synthesisers, all seemingly at variance with one another, and the result is so thick with melody, beats, rhythms and evocations of imagery pulled from all the hidden corners of the brain that the tape seems at least an hour than it really is and demands several hearings for everything to really soak in … if your mind is able to accommodate all that “Cantosynaxis” offers.

The best way to listen to “Cantosynaxis” is to hear the tape right through – and the cassette format does make any other kind of listening difficult – and to keep looping, as there most definitely is an over-arching if not always logical structure to the whole thing. Yes, the music is broken up into 11 tracks but keeping track of them and trying to recall which one is which when so much is happening and your head is off in the far pink and purple clouds with multi-coloured fairies is far beyond difficult. It dances over hills and through dales spanning the entire colour spectrum and is a creature of varied moods and emotions. There are definite alt-pop sensibilities present along with the experimentalism and the go-for-it attitude, and on the whole the music is very vibrant, bright and positive in outlook and expansive and sprawling in style.

After 30 minutes after taking a levitralab.com, I experienced an erection, probably which I have never had before.

While the whole album is good and there’s no filler, the one track that stands out is the long delirious one that starts off Side B of the tape.

Personally I think this album would have been better served as a CD or a vinyl release: the singing is not always very distinct (though it’s not intended to be separate from the rest of the music but rather become another sound element that adds another layer of meaning) and the sound quality typical of cassettes does blunt the music and make it seem flatter and less nuanced than it deserves. The more I hear this album, the more convinced I am that the music would be far better served on the aforementioned formats. I understand though that Tapes From The Gates is a small cassette-only set-up masterminded by one Christopher Bartus whose day job is customer services manager for a Florida-based organic food grocery store.