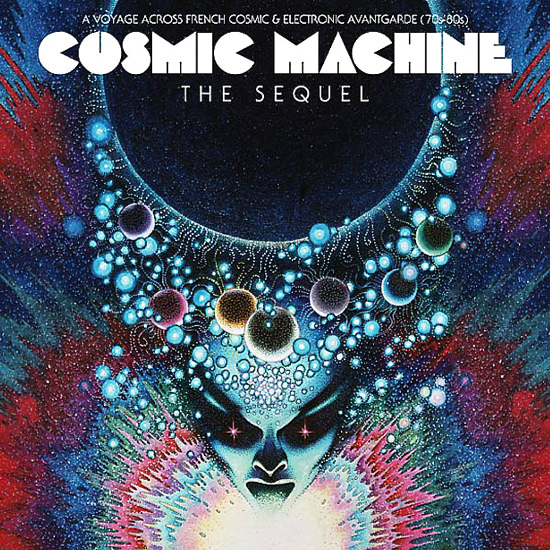 As if you couldn’t already tell from the title, this album is the follow-up to the earlier Cosmic Machine compilation of French cosmic space and electronic disco from the 1970s to the 1980s. While a fair few styles of music from that period are represented here – we’ve got space funk, floaty mood music, soul, early techno, musique concrete and a couple of all-electronic experimental improv pieces among others – much of the music on display is frankly relentless and repetitive trash Euro-disco thunk-a-lunk that probably still gets played at veterans’ clubs, casinos, over-50s wedding parties and Saturday midnight television advertisements for last year’s models of white-goods at giveaway prices. The presence of two tracks cashing in on a couple of more famous songs imported from Britain and the United States should be a warning that there’s a lot of commercial disco music here that probably should have remained obscure.

The best tracks on the CD turn out to be the ones that bookend it: Pascal Comelade’s “Mouvement Decompose d’un Coup de Marteau” is an all-too-brief exercise in needle-sharp drone that laser-like drills holes in your head and ears, all the better to drown you in what comes in the next 21 tracks; and Pierre Schaeffer’s “Moins Banal (Interlude, ou Impromptu)” is a whimsical busy-bee piece that shyly flits in and out of dark space and leaves bleeps and bloops of quivering ectoplasm in its wake for intrigued listeners to follow.

This leaves the huge bulk of 20 instrumental tracks to thump out in more or less tedious repetition whatever limited charm they can offer. Try as I could, and I did listen to this album quite a few times, I couldn’t find many looping pieces that stuck out heads and shoulders above the others. Nicolas Peyrac’s delicate “Rite” is a rare cosmic space gem that sparkles briefly. Arpadys’ “Monkey Star” has a strong bass groove and a slightly shaky, near-hysterical wobble feel. Video Liszt’s “Fade in Hong Kong” is an 80s-sounding synthpop ditty with a slight melancholy feel that sits a bit oddly with the cheery tune and synthesised voice. Elsewhere on the album is a cover version of Hot Butter’s “Popcorn” (that used to drive audiences around the planet nuts with its boppy-poppy staccato notes) by Anarchic System and a trippy space disco version of a Pink Floyd song by Rosebud.

I guess I’m just not cut out to review old 70s space disco music and 80s synthpop as so much of this music unfortunately leaves me cold. Those of you unfamiliar with the Euro disco space scene may find this CD a good enough introduction to the music and its inspirations. A lot of the music here is happy breezy stuff without a care in the world and that attitude may well be the one positive legacy that remains with listeners after Schaeffer’s little flotsam space piece has tidied up everything and put it all away in its genie bottle.

Sometimes I wonder whether knowing that such music used to exist is better and of more value to us than the music itself, for what it says about French pop music culture of the period.