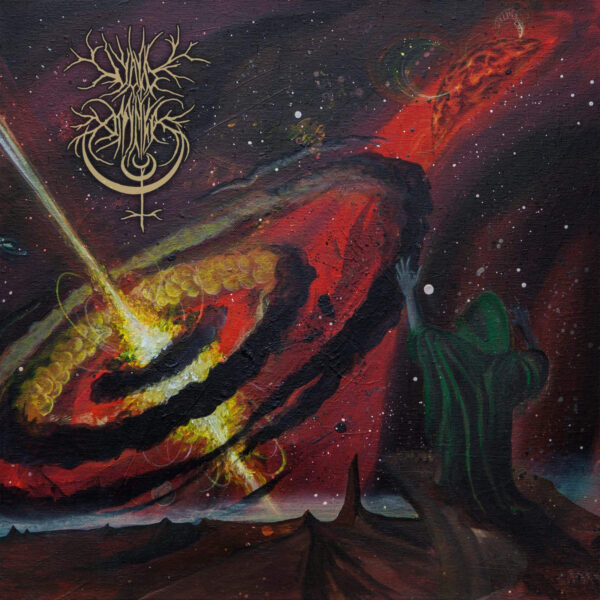 The spiffy cover art by artist / cartoonist Glenn Schonn, in which a green-hooded sorcerer figure has just cooked up an almighty explosion out of which a red mottled slug thing zips on its inevitable journey to Earth millions of light years away, caught my eye which was jaundiced from seeing far too many black metal album covers of trees, trees and more trees that often had little to do with the actual music hidden beneath the cardboard or the paper. “Dying Light” – well the cover art didn’t look like it was in the throes of death to me – is the debut album for Californian band Void Omnia whose members boast long CVs from having played with other bands (mostly in the death metal genre). The members’ past experience is on show: they all play well technically and are comfortable in one another’s company, no matter how fast they go, and the songs are crafted with an ear for melody, riff and tone, and a feel for emotion and atmosphere. An experience of death and the conflicting states of mind and emotions that might accompany the soul on its journey between two dimensions drive the album’s five songs.

“Remnance of a Ghost Haunt” gets the album off to a roaring and highly aggressive start; the music is dense and fast-paced thanks to tireless blast-beat percussion. Guitars verge on the scrabbly and the vocals are very ragged but the song holds together for 7 minutes and over. “Fallowed Remembrance” is also a fast scrabbly song for the most part but allows some slightly slower moments of melodic guitar playing. Into the third song and (gosh!) there’s just no rest for the band, the musicians keep going as if their lives depended on giving all they have to this album and its themes. Later tracks like “Of Time” start to admit a more definite mood – some melancholy and sorrow – and development of their themes, and show that the VO guys do know how to play emotional music with crunch and bite.

Some may gripe that the songs aren’t all that distinctive and can hardly be distinguished from one another, but the counter-argument is that they describe a process – even just looking at the song titles gives some idea of a narrative detailing a rite of passage. True, by sticking to a straight and narrow path of raw aggressive blast-beat black metal the band doesn’t showcase all it has to offer. We will have to wait for future releases to see if Void Omnia can deliver more than just speedy BM with melody and some emotion. For the time being though, the band offers full-on blast-beat BM aggression and that’s sure to please a lot of listeners.