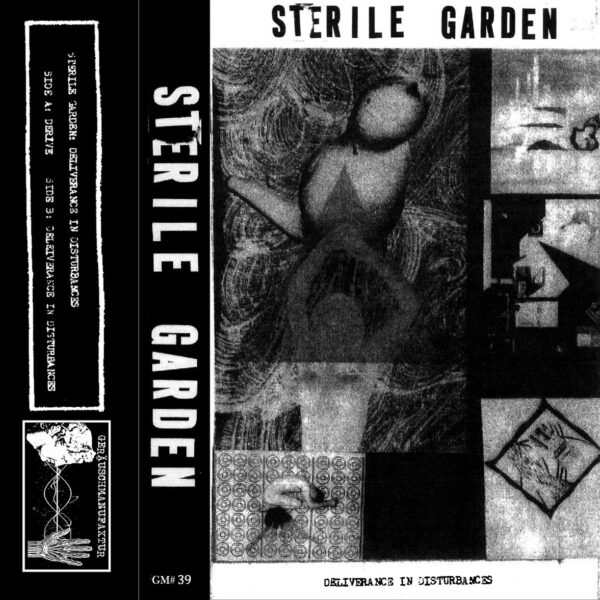 Sterile Garden is another obscure noise project of which I know very little. They may be a trio comprising man man Jacob DeRaadt, with later additions Eric Wangsvick, and Joseph Yonkers; Sean Devlin may once have been in their ranks. They’ve been at it since about 2006, and we have before us their current cassette Deliverance In Disturbances (GM# 39) from the German label Geräuschmanufaktur dedicated to the spread of experimental industrial sounds and harsh grindings. The first side of this monster, called ‘Derive’, is a grim trek across a landscape of supreme desolation; no way of detecting the original sources of these clanking grunts, and a general air of defeatedness hangs over the work. I’ve rarely heard such a corrupted sound, as though the very fabric of the music itself were rotted clean through, like mouldy blankets, rusted machinery, or trees afflicted by disease. Clearly all is not healthy in the Sterile Garden, a garden littered with weeds, insects, and dank ponds.

The title track is on Side B. This is slightly less horrifying than the dismalness of ‘Derive’, and in places one’s ears can make tenuous connections to more familiar tape-based experimental music, in the way that sounds are apparently processed and manipulated. Much effort is put intro creating a wonky, unnatural effect. Much distortion arises in the process, and futile meandering drones are the main output, drones which are highly abrasive and nasty in their intent. As with the A side, I sense a near-complete lack of humanity, as if DeRaadt’s plan were to efface every trace of anything recognisable from the finished product. This may all be part of a supreme effort to alienate the listener, leave us high and dry and thrown back on inner resources if we wish to survive this depressing onslaught of rubble, bad weather, and hostile machinery pounding away at the core of our being.

The cover art may continue some of these themes. The imagery is almost all abstract, with few concessions to printing a clearly identifiable image, or even allowing for simple clarity of shape. Murky reproduction creating shadows and fog further advances the notions of ambiguity and uncertainty. The front cover is a miniature art gallery from the imaginary museum of Russian Death Art from the 1920s. Inside is a collage of treated photo which may represent the aftermath of an unpleasant murder or suicide, with a barely-recognisable torso being dragged by the feet. None of this is especially brutal noise, but it is truly depressing, verging on the insufferable in its sullen opacity and determination to remain grim and impenetrable. From 14th March 2016.