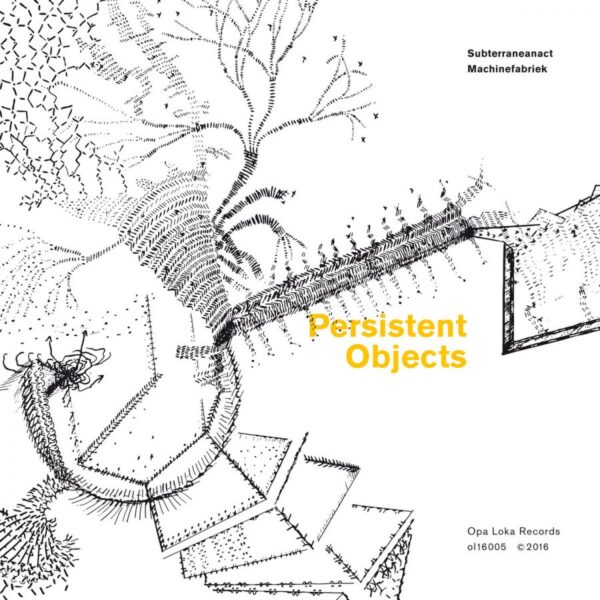 Persistent Objects (OPA LOKA RECORDS ol16005) is a fine piece of bass clarinet tootling paired up with exciting live electronics by Dutch players Subterraneanact and Machinefabriek. They did it in 2015 at the Worm venue in Rotterdam, a hub for cultural excellence run by Lukas Simonis, who had the ingenious idea of pairing these two fellows in the first place. Henk Bakker and Rutger Zuydervelt have never played together before, but it seems they stepped up to the plate manfully, and without wasting any time with planning, discussions or mutual back-slapping, they soon locked into producing some 90 minutes of music right there in the room, of which the present CD represents an edited mix. Modernistic sounds and woodwind curlicues resulted, not in any way recognisable as conventional free jazz, neither does it settle for boring old process-droning.

The combination of woodwind with electronics always proves an intoxicating brew for this listener [1. Start with Richard Teitelbaum & Anthony Braxton’s Time Zones on Arista Freedom from 1977.], and Bakker distinguishes himself with his incredibly fluent and adept playing, producing surprising and elegant lines in the air with ease. Zuydervelt can produce rather “understated” long-form episodes when left to his own devices, but this date is evidence of his agility and quick-thinking responsive skills in the live situation. The listener is led through mystifying passages of oddness, to emerge in sunlit rooms of open air where all is well. A satisfying piece of work.

Jetske de Boer did the cover drawings which resemble surreal chemistry diagrams getting out of control, while the title Persistent Objects seems to have very little bearing on the actual contents. From 21st March 2016.