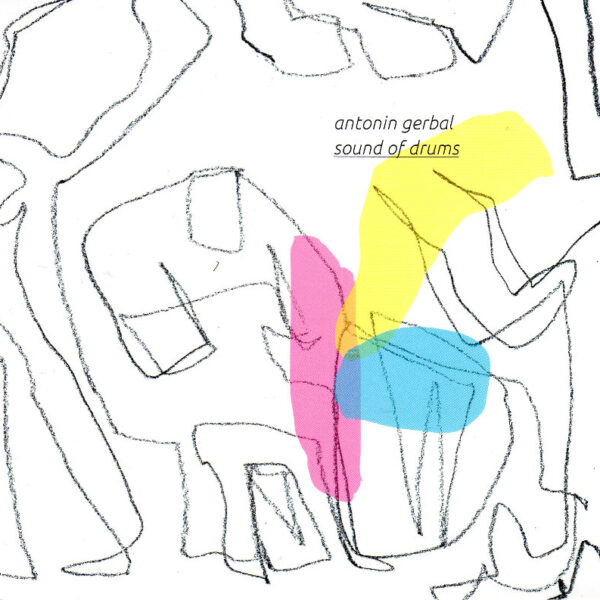 Parisian drummer Antonin Gerbal has graced our pages before playing with the trio ZOOR, where his “modest lack of ostentation” was noted by Stuart Marshall, and also on a far more restrained outing called Heretofore with the sax player Bertrand Denzler. He’s now made a solo drumming record called Sound Of Drums (UMLAUT RECORDS UMFR-CD17), an album which sets out its stall with the 21-minute title track at the start; with a minimum of means, and a tightly controlled expression, Gerbal manages to keep the listener in a perpetual state of expectation with his brutally simplistic drumming styles. It’s about half snare-drum rolls, half cymbal splashes to suggest waves of energy; the drum roll makes me think of watching a high-wire act, or a magician’s trick, that seems to take forever to complete. The tension produced is almost unbearable, and the listener’s desire for closure grows steadily with each passing moment. Already I feel like I’m hearing the percussive equivalent of an endlessly rolling Samuel Beckett text, pages and pages of sentences punctuated only by commas. Will we ever reach a full stop?

The modernist allusion here may not be completely off the beam, given that Gerbal’s aesthetic aim is to remake the history of (American) jazz drumming through his own distinctly European coffee-flavoured brain. “Since 2009”, according to the press note, he has “developed his own approach to the drums”, and we are invited to note the connection to European musical improvisation. His austere process may have had quite severe side effects. It appears to me that along the way he has sacrificed a good deal of energy and passion, and he seems determined to reduce the drum kit to “skin, wood and metal” – the list of physical materials is again drawn from the press note, and feels like a 1970s conceptual artist’s view of the world, seeing physical matter as the only “truth” worth bothering with, denying any form of sublimation or aesthetic pleasure for the audience.

Other pieces, such as ‘Antefixe’ and ‘Qualia’ are likewise fixated on utter simplicity, in places appearing almost as utilitarian as a row of rivets driven into a girder; it’s like riding your bike over an endless series of tiny speed bumps. I’ve no doubt that Gerbal is familiar with the technique of syncopation, but he’s evidently forcing himself to forget that skill for this record, and indeed anything else that might make his music remotely human or approachable. By the time I got to ‘Repetition’, the last track here, I felt that he was knocking six-inch tungsten nails into my forehead with a metal hammer.

If Milford Graves and Sonny Murray evolved jazz drumming by playing “around” the pulsebeat in a highly inventive and subjective manner, Gerbal has (on this record at least) attempted to reverse that entire trend by insisting on the pulsebeat and nothing else. It’s a stark message he delivers, but I do have a certain admiration for the way he sticks to his guns and keeps on playing, even well past the point when his mind and body must be on the point of collapse from sheer monotony. From 31st March 2016.