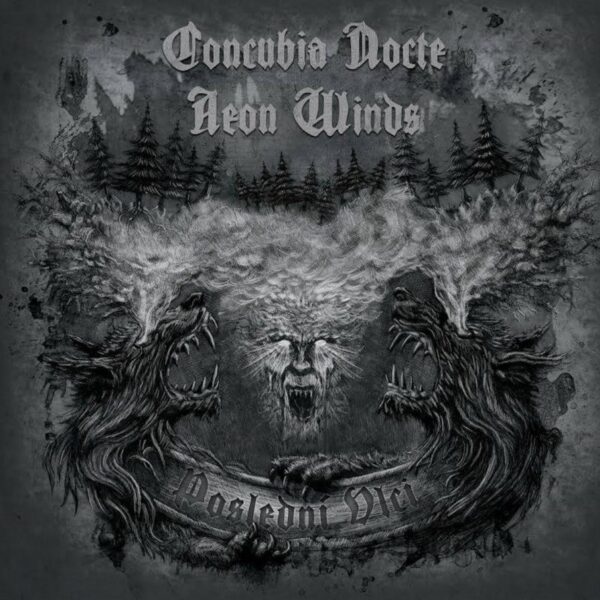 As these two Slovak BM bands share a member and both bands express a common interest in Slavic mythology, you really don’t need a crystal ball to predict that sooner rather than later Aeon Winds and Concubia Nocte would release a split album. Aeon Winds contribute four songs that take up the first half of the album and Concubia Nocte fill up the second half with five songs.

The overall style of the album could be described as harsh raw black metal with folk pagan, symphonic and ambient influences that occasionally throws out some heavy atmospheric bluesy mood music. Aeon Winds mix up their brand of fast-paced raw and aggressive blast-beat BM with dark ambient and folk resulting in a cold and forbidding yet dramatic and powerful style. “The Path of Devouring Flames” rockets along at super speed, guitars sparking on fire and synthesiser barely managing to keep up with this music in full attack mode. The vocals are just barely audible above the rapid pounding and if only they had been a bit more upfront in the mix and had more rage the song would be even more forceful and uncompromising than it is. After this, the band goes straight to the instrumental dark ambient side of its personality with “In Times of Old”, a hypnotic orchestral mood piece with dreamy trilling keyboards and animated acoustic guitar melodies. Birdsong in the background adds a feeling of brightness and serenity. Aeon Winds’ contribution concludes with a cover of an Emperor song “Inno a Satana” delivered in straightforward melodic black metal style with steely grinding riffs and harsh wraith-like vocals. The synthesiser layer in this song seems completely unnecessary.

Concubia Nocte have a similar split raw BM / ambient style and the music is equally as fast. The band combines its machine-gun raw BM aggression and folk pagan elements better than Aeon Winds does but then this difference could just be a consequence of the choice of songs both bands include on the split. Concubia Nocte’s music sounds slightly more accessible and songs have a definite Odinpop feel in their riffs, melodies and general song-based structures. Of the five tracks on offer, the highlight is the very powerful and hard-hitting “Ve?ná Vô?a” which boasts huge riffs, thunderous percussion and a constant grinding bass groove. The thin vocals are all but overpowered by the huge scale of the music. Keyboards on a track like this are really unneeded but the band wants them in anyway. “S Posledným Lú?om Slnka” is a more underground and garage-sounding BM track, fiery and malevolent and threatening in its style and attitude, and offering some moody surprises in its otherwise rapid-fire spitting rage.

Both bands are good but I much prefer Concubia Nocte for their aggression and sound. The band relies much less on synthesiser and its sound is stronger, less pallid as a result. Whatever keyboards exist are really surplus to the music and the band could, maybe should, junk the synthesisers altogether. If both bands must have additional instruments, I’d much rather they had acoustic keyboard instruments. Aeon Winds have a more tinny and thinner sound which disadvantages them when they are paired with Concubia Nocte. The biggest downside for both groups is the weak vocals on all tracks that feature them. On the whole though, this split is a good introduction to both bands and provides an entry into the Slovak black metal scene.

The recording is also available through Asgard Hass.