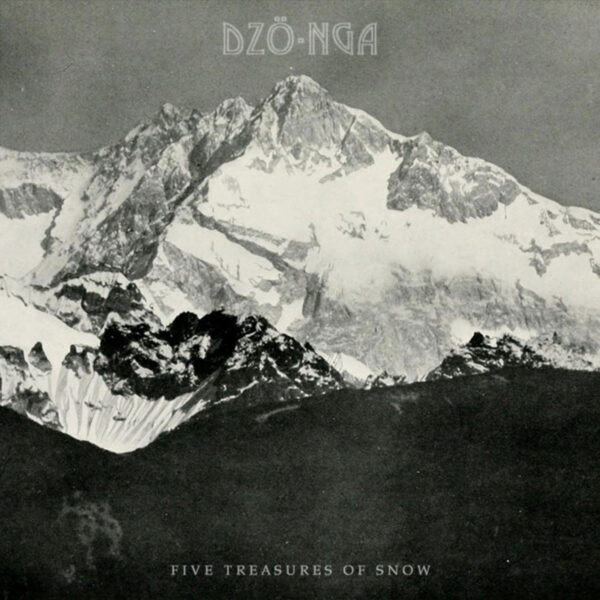 Dzö-Nga is a one-man atmospheric BM band based in Boston, Massachusetts state, whose themes draw inspiration from Tibetan myths and legends centred on the Himalayan mountains. The band’s name itself is a part-abbreviation of Kanchen Dzö-Nga, the name of the third highest mountain in the Himalayas, and whose meaning is “five treasures of snow” which is also the title of Dzö-Nga’s debut album.

While the band’s music is melodic raw atmospheric BM and is as harsh, gritty and emotional as would be expected, the most interesting aspect of Dzö-Nga’s style is that it features no percussion at all – no drums, no cymbals, nothing that serves a time-keeping role – yet manages to stay minimal and packing in a lot of power. The guitars are either noisy and gritty BM tremolo strings or very dark and plaintive clear-toned or acoustic with enough echo to highlight their isolation within a black shadow space. The bass is very clear and lurks like a constant grey eminence behind the music, being used mainly to provide a melodic foundation for the guitars and provide a counterpoint to them.

The lack of any percussion-like instrumentation that would pace the music with a constant beat forces Dzö-Nga man Cryvas to emphasise melody, musical flow and structure, sound texture, mood, space and atmosphere in all the songs. What he comes up with is an astonishingly focused work of strong, brooding emotion, with tough cutting and seething BM tremolo guitars and acidly venomous vocals. Because the bass sometimes follows its own path in the music, it adds a moody quality to the already dark music. Slight reverb on the clean-toned guitars heightens the feeling of darkness, alienation and solitude.

The songs are not very different from one another and while their lack of individual distinctiveness is probably no problem given the kind of conceptual album “Five Treasures …” is, future recordings are either going to need a time-keeping device or expand beyond the narrow guitars-bass-vocals minimalist BM template to avoid being elaborations of the debut album. Cryvas might consider including Tibetan musical instruments and styles into the music to give it a strong individual flavour. I’m not familiar with traditional Tibetan culture and traditions so I trust that Cryvas knows his way around Tibetan Buddhism and native Tibetan culture and mythology. There may be a very rich vein of lyrical themes and inspirations that he could mine and which would sustain Dzö-Nga for several albums.

“Five Treasures …” works best if heard in its entirety in one sitting so listeners can appreciate its flowing quality, the deep brooding atmospheres, the use of dark space as an instrument and mood-setter, and the subtle, almost organic changes that occur throughout. This is a very brave and ambitious recording worth hearing a few times if only to appreciate what is possible in raw minimal BM without percussion.