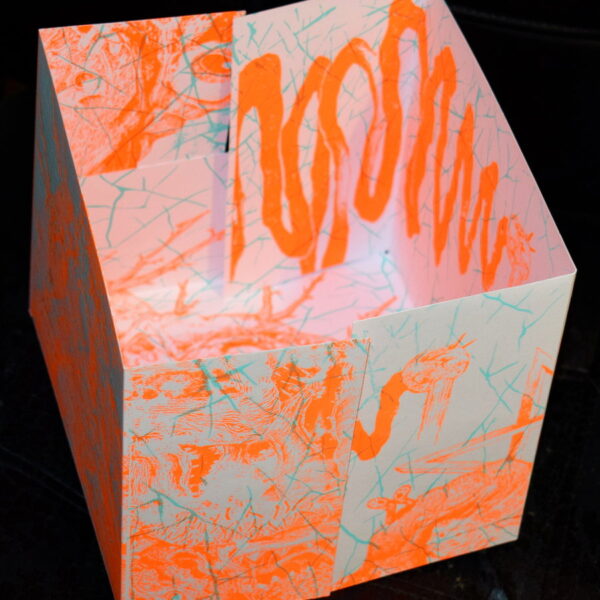 Another brute of artnoise in a luscious sleeve from Le Petit Mignon. This one is very hard for my poor brain to understand. I’d better take it one step at a time. LPM14 is a split 45RPM between Hedoromeruhen and H.

Hedoromeruhen are the obscure Japanese duo of Daisuke Ichiba and Yasutoshi Yoshida, the latter probably best known to you all as Government Alpha. Also he’s a graphic / visual artist who makes amazing collages, and runs the Xerxes label. They have collaborated before on their eponymous 2013 release, a monstrosity hopefully described by its creators as “experimental folk”. I think Hedoromeruhen are responsible for the side I spun first, where a vari-speeded voice is engaged in a losing battle with buckets of harsh noise, much like Theseus wrestling with a giant squid. A song – we might call it a folk song – struggles through to the surface in unexpected places. I’ve rarely heard anything so deliciously unhealthy, horrid, and alien…a candy bar laced with live insects, whose bodies are filled with toxins you discover unwillingly with each chomp.

The Staalplaat store people in Berlin are in a way responsible for creating the hideous monstrosity that is Hedoromeruhen. In 2011 they put together an exhibition of experimental music and art from Japan. Both Daisuke Ichiba and Yasutoshi Yoshida were invited to exhibit their visual artworks, and it was here they formally met for the first time. It seems Yoshida played an impromptu noise set at Staalplaat, and it piqued Ichiba’s interest. Or it punctured his eardrums, whichever comes first. Thereafter they met up again in Tokyo where they both live, and this collaboration began. ‘The Cat’ – for such it is titled – is indeed an acoustic guitar song performed by Daisuke Ichiba, during which the incorrigible Yoshida throws down a barrage of electronic sounds and treatments. Apparently the lyrics to ‘The Cat’ are “poetic, grotesque, and metaphorical”. I am quite prepared to believe that. I’m a cat lover personally, but after hearing this I’ll never be the same.

H. is Heloise. She runs a record label called Zamzam Records in the UK and has the distinction of having made a split cassette with Sudden Infant. “Ritualism, Ceremony, Dream” are the buzzwords you find at the gateway if you enter her occluded website; living fantasies of Maya Deren and Kenneth Anger, fed through a Siouxsie Sioux template of mascara, are her stock in trade. Her recording called ‘La Vague’ I think was captured at Le Monstre, a small press festival in Geneva in 2012. It’s not clear if that’s true though; the press states “La Vague presents the similar sonic ingredients that moved us so much that night”, which could be interpreted as some form of restoration or re-staging. No matter. Her approach to the mesmerising electronic drone mode is far from placid and peaceful, she disturbs the surface with many clanks, percussive metallic rings, and hollowed-out effects. Reverb and echo go somewhat mad, loops teeter on a precipice. It’s pure nightmare; far more deserving of the “surreal” epithet than Nurse With Wound.

To complete the package we have a screenprinted artwork made by Alkbazz, a Finnish graphic artist and illustrator whose pages on Deviant Art reduce most men who behold them to gibbering wrecks…going much further than H.R. Giger into the world of skeleton and insect fear with his razor sharp and overwrought pen work, he unleashes high-detail hideous visions with gusto. He’s best displayed in black and white, but on this record cover he’s been printed in a full-strength dayglo orange that will make your eyeballs jump out of their sockets. From 9th February 2015.