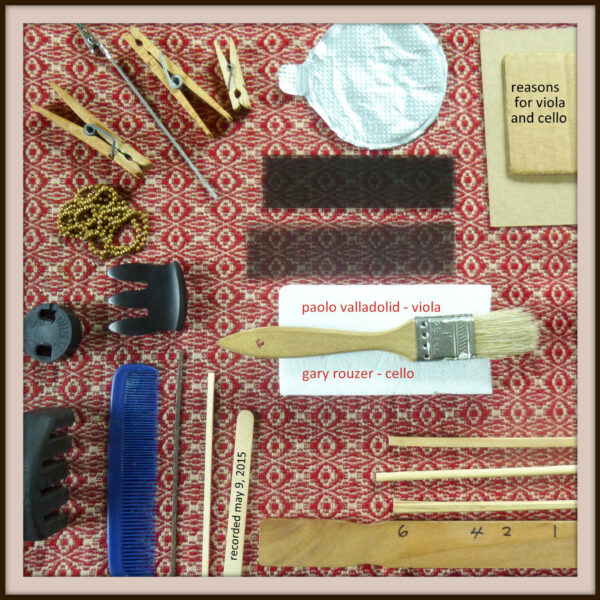 Washington DC improviser Gary Rouzer made a big hit here with his Domestic Shrubbery release, where he showed you just what a man can do with a few sheets of cardboard when it comes to making a “prepared” instrument. I’d favour cardboard any day over the screws and bolts which John “Flipping” Cage seemed to be advocating for his prepared piano, as cardboard arguably causes less permanent damage. I have always suspected Cage wanted to undermine the piano in some way, as part of his destructive anti-music agenda.

Here is Rouzer again with Reasons For Viola And Cello (AMPTEXT), nine intimate pieces of improvised chamber music he made with Paolo Valladolid. Rouzer has his cello, Paulo has his viola, and the “preparations” they used for these recordings are shown in a photo on the back cover. Notice in this inventory there is a certain amount of metal, but mostly wood and plastic, which I think is a good mix for the kind of effects they’re seeking. The great thing is that the instruments are enhanced by this interventions, and the musicians are empowered to grasp at unusual sounds they couldn’t otherwise manage.

The first time the duo played together, they did it in a tunnel in Alexandria, Virginia (much like the Japanese duo Kuwayama-Kijima have often done), and the results of that hopefully very echoey and ghostly session were issued by the Confront Recordings label. This item however is all indoors, has a dry but very intimate feeling, and comes close to realising the dream of “semi-structured conversations” that people have been aiming for with free improvisation music for many years now (I would assume). Even the track titles, which are fragments of intriguing sentences such as “the window fell out”, reflect this conversational aspect. Much to enjoy in this warm and engaging playing.

I’m also glad to read a Polly Bradfield namecheck on the cover. She was a New York violinist who worked with John Zorn and made a few records for Eugene Chadbourne’s Parachute label in the late 1970s, and her work is due for some serious reassessment (and reissuing) if you ask me. From 21 April 2016.