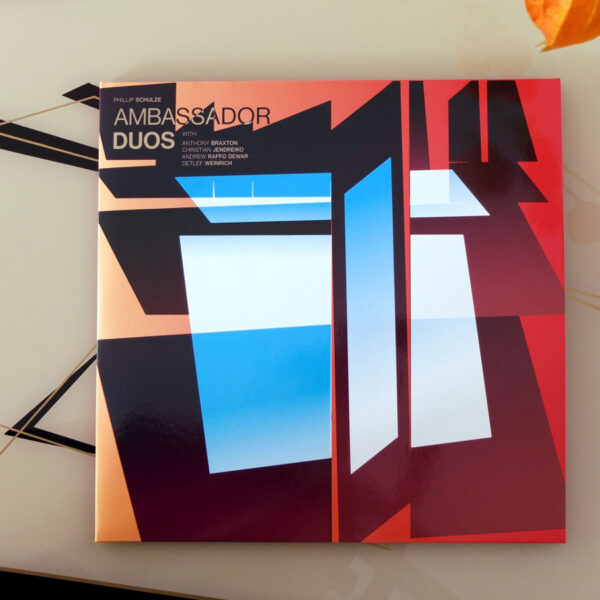 One improviser for whom time is but a servant is Deutsch electronics whiz Phillip Schulze, who is known for wielding oak-barreled, 15-year vintage algorithm tools in improvisations for over a decade now; his electroacoustic stylings unmoored from any compositional context. As well as providing extensive written documentation for each of the following four ‘trans-idiomatic’ duo recordings, Schulze converses via gravel-skinned and elegantly contoured sound fields that do more than simply upholster the counterpart’s performance, being quite up to the task of heavy excavation as and when necessary; the resulting open-border spaces instigating some intensive paired explorations.

The first session was a bit of a coup, starring none other than Schulze’s former college professor Anthony Braxton. The pair had played together on six occasions in 2005 (of which I believe this to be the last), during which time Braxton went through numerous instruments, settling on this occasion for soprano and contrabass saxophones. He flutters through like a tai chi butterfly, unsheathing muscle in the central section, prompting a correspondingly corrosive turn from Schulze, whose moods and movements mirror his senior’s with uncanny dexterity. The mood and detail of this ‘early’ event (just two years into Schulze’s recording career) reflect both a nascent talent for complex textures as well as the mutually assured rapport the pair had settled into after just a handful of extra-curricular encounters. One can only imagine the pedagogical savour Braxton must enjoy when working with such similarly-minded students. It must thrash the living hell out of getting through an evening of test-marking.

Recording resumes in 2009, with ‘sound and action artist’ Christian Jendreiko on pedal steel guitar; atmosphere generally more streamlined, with just the odd, caustic outburst and echoes of Bill Frisell’s lonesome, Western laments amid twinkling electronics. Schulze relishes in writing the ambience that resulted from the pair’s split-channel approach, which culminated in an unexpected accompaniment by a blackbird perched outside the window.

By the time of the duo with the second saxophonist, Andrew Raffo Dewar in 2011, the pair were well-established collaborators, having pooled their musical expertise as far back as university. No surprise then that their strident ambient tonality effectively camouflages their ’microtonally shifted octaves, oscillations and phase shifts’ and the resulting, tectonic high drama.

The last and most ‘antagonistic’ pairing is with Kreidler’s Detlef Weinrich (2014), whose characteristic quasi-motorik rhythms find playful counterpoint (or plain collision) in such off-kilter rhythms as those post-club mutations with which Schulze began his recording career, lending this set a pleasing symmetry: that of Schulze’s club music reminiscence via intensive academic studies in Indonesian and African percussion.

Stark as it appears on paper, the four sessions are gratifyingly accessible, differentiated and more than worthy of their heavy vinyl presentation. At first glance, Phillip Schulze is a composer who picks his moments as well as his partners, and the rumblings from the unfathomed depths of these deep trenches indicate further pleasures.